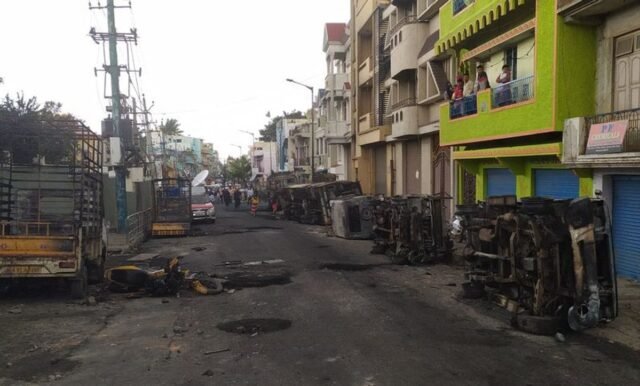 The NIA, which has taken over the investigation into the August 11 riots in DJ Halli and KG Halli in east Bengaluru, on Thursday arrested Sayed Saddiq Ali, 44, for his alleged involvement in the riots. According to an NIA press release, the accused works as a recovery agent with a bank and was absconding immediately after the riots.

The NIA also conducted searches at 30 locations in Bengaluru on Thursday, during which  airguns, pellets, sharp weapons, iron rods, digital devices, DVRs and SDPI and PFI literature were seized. The Special Investigation Team of the NIA is led by an IGP-level officer.

The two cases taken up by the NIA were earlier registered at the DJ Halli and KG Halli police stations. The cases pertain to mob violence by members of a minority community, allegedly provoked by a social media post by Naveen, nephew of Congress MLA from Pulakeshi Nagar Akhand Srinivas Murthy. In the ensuing violence, the house of the MLA was vandalized and burnt.

The state government had recommended transfer of the case to the NIA since several of the accused allegedly have links with terrorist outfits. The MHA subsequently tasked the NIA with the probe, and the Karnataka High Court was informed of the matter.