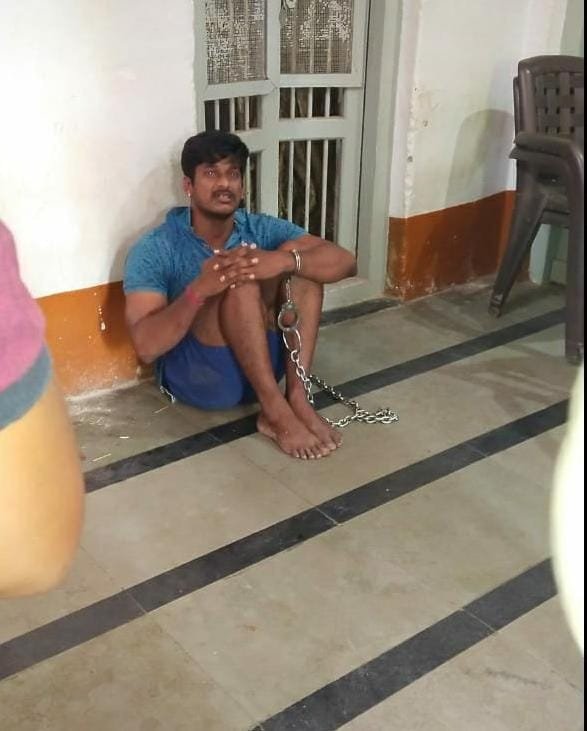 The picture of a CRPF COBRA commando chained and made to sit on the floor by the Belagavi police has prompted angry reactions from netizens over ‘police overreach’.

A twitterati, Mithanshu, detailed the incident thus: “The CRPF jawan was on leave and at his home in Yaksamba village in Chikkodi taluk of Belagavi district. On 23rd April, the jawan was cleaning his bike in front of his house when he was approached by the police and accosted for not wearing a mask. Sachin Sawant was then allegedly beaten by the police personnel, without any warning.

“Despite informing the police that he is a CRPF commando and is currently on leave, and since he was cleaning his bike in his house and not going out anywhere, and did not need to wear a mask, the police personnel allegedly kept beating and abusing him.

“Savant was then paraded to the police station in handcuffs and was put under custody. The SHO of the police station allegedly registered an FIR under section 353 (assault or criminal force to deter public servant from discharge of his duty), 504 and 505 (intentional insult with intent to provoke breach of the peace) of the IPC….the FIR has been registered without informing the controlling authority of the CRPF commando.”

In a video of the incident shared by a journalist named Soumyadipta, the commando is seen standing near a bike (his service bike, as per reports), while multiple police personnel argue with him. One police official is seen holding the pants of the CRPF jawan in a humiliating manner, in an apparent attempt to stop him. The police officials repeatedly push and shove the jawan.

In the video, after some argument, the jawan is attacked with a lathi by the police. After that, the jawan also retaliates.

As per Soumyadipta’s post, Sachin Savant is posted with the 27th  COBRA commando battalion and was on leave. However, he was reportedly trying to explain to the police officials that he was servicing his bike, because COBRA commandos have to always remain on standby for any emergency. As per the post, since he was neither loitering or roaming around, he was not violating the lockdown rules in any manner.

Soumyadipta said the Belagavi police have  written to Sachin Savant’s commanding officer in Bengal, informing him about the jawan’s arrest. The letter alleges that Savant abused and attacked the police officials first.

As per another report, Belgavi SP Laxman Nimbargi said, “An argument started regarding central police versus state police. The CRPF jawan then held the collar of our constable and started kicking him. The head constable then had to rescue his colleague, that’s when you see him using the lathi, based on which the FIR was registered.”

The police have further alleged that during interrogation, the CRPF staffer admitted that he was in a foul mood because of a ‘fight’ in his household.

Reacting to the episode, Labour Secretary Captain P Manivannan tweeted: “Karnataka DIPR, please get a report from the local DIPR officer on this issue.”

Karnataka DIPR tweeted in reply: “Dear Captain, as per your instructions, PFA the detailed report received from DIPR – Belagavi. The same has been DM’ed to you.”

The report quoted the police as saying: “On April 22, the deputy commissioner of Belagavi had passed an order imposing a fine for not wearing masks and spitting in public places. On April 23, two of our constables were patrolling in Examba in order to implement the DC’s orders. When our men went to Maddumgalli Cross, the CRPF jawan was talking to 5 to 6 of his friends. On seeing the policemen, the friends ran away and the CRPF jawan was standing and without wearing a mask.

“When the policemen asked him why he was not wearing a mask, he started arguing — ‘whoare you to ask, and I am from CRPF’ — thereby violating the orders promulgated by the DC. When policemen said the rules are the same for everyone and you are not special, an argument between the CRPF jawan and the policemen started.

“The CRPF jawan lost his cool and kicked one of the constables in the stomach. He held the collar of the  constable and started pushing him aggressively. The head constable came to the rescue of his colleague.
“Later, the jawan was taken to the police station and a case, CR NO 44/2020, was registered under sections 353,323 and 504 of the IPC and section 3 of the Epidemic Diseases Act. He was produced before a magistrate the same day.”

Responding to the video of the incident, Manivannan tweeted: “The video is not conforming with the report given by our DIPR officer which blames the CRPF commando. This incident needs a detailed investigation by an independent agency.”

BBMP to create history with budget via video-conferencing