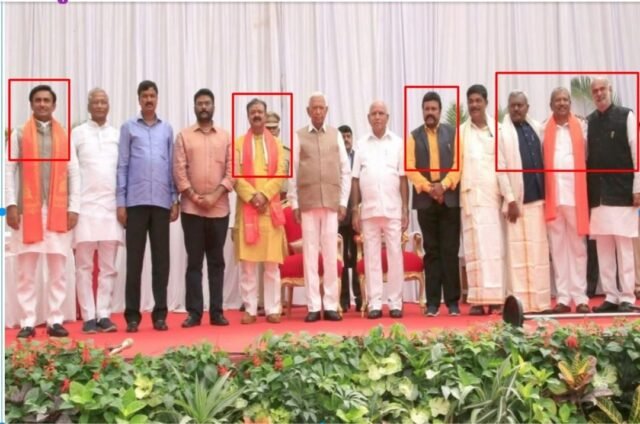 The city court CCH 20-XXVI additional city civil sessions judge DS Vijaya Kumar has granted injunctions to all six cabinet ministers in Chief Minister BS Yediyurappa’s government after they had sought a stay order on the telecasting/publishing of any defamatory news against them on TV channels, newspapers and online news portals.

Interestingly, the caveat of TV9 Kannada channel filed on Saturday was turned down by the court, which ordered the channel to abide by the injunction. The judge added that TV9 Kannada’s petition woud be heard on March 31.

Issuing the stay order, judge DS Vijaya Kumar noted that advocate SSS had filed a ‘vakalat’ for defendant No 2 (TV9 Kannada) along with a copy of its board resolution copy and added that defendant No.2 has filed a caveat petition on Saturday. “Now, the said caveat petition is placed before the court. Whereas this suit was filed on March 5, 2021 and IA No.1 (Shivaram Hebbar) was heard on the same day and the matter had been reserved for orders, and in the morning session before commencement of the open court itself the order has been dictated and made ready. Hence, after the order is ready, the question of considering a caveat does not arise. Call on 31.03.2021. Issue process as ordered,” the judge said in her order.

Advocate Channabasappa SN, on behalf of the six ministers, in his petition said that all six being elected members of the Karnataka Legislative Assembly and presently ministers in the Government of Karnataka, have instituted this suit against the defendants 1 to 68 (media houses including TV, newspapers and online media). The relief sought is for permanent injunction to restrain the defendants from broadcasting, telecasting or publishing, or letting in circulation, or posting or accommodating the posting, or transmitting or circulating or expressing in any manner anything that is defamatory or negatively impacting or hazardous to plaintiffs and committing any act or intentional omission raising a negative image, character assassination, or creating sarcastic views on them and levelling baseless and unverified allegations against them, and from defaming or damaging them by discussing their character in any manner, including showing the footages and pictures involving or referring to the plaintiffs in a negative spectrum.

The six ministers have claimed that recently media channels in the state, including social media platforms, telecast and published news under the title of ‘Sex Scandal’ about minister Ramesh Jarkiholi alleging that he sought favours from a woman by promising her a job. This was telecast/published even before verifying the news, its sources and authenticity, resulting in Ramesh Jarkiholi resigning as minister.

“On the heels of the same, it is alleged that some media houses are telecasting/publishing news that there are other CDs containing several sex scandals pertaining to MLAs and ministers and there are around 19 CDs of different MLAs and ministers, including that of an influential politician from the Old Mysore region. On the basis of such false news being telecast, members from the respective constituencies of the plaintiffs have started calling them, presuming their involvement in such sex scandals. Family members of the plaintiffs are being put in an embarrassing situation. Recently, by a process of deep fake using artificial intelligence, videos of world politicians such as Barack Obama and Queen Elizabeth have been morphed and have gone viral. Similar videos of some Indian politicians have also been made. Innocent people who are unaware of such a process tend to believe the videos and their contents to be true. Therefore, the plaintiffs apprehend that by using fake C.Ds. their reputation would be harmed. Hence, they have instituted the suit,” the ministers said in their petition.

The ministers have produced printouts of the screen shots of the telecasts in ‘B’ News Channel and ‘BTV’ News Channel. In the printouts pertaining to ‘B’ News there is a caption telecast as “ಬಾಂಬೆ ಕಳ್ಳ ಕಾಣೆಯಾಗಿದ್ದಾನೆ”, “ಸಿಡಿ ಪ್ರಭಾವ”, “ಕಂಗಾಲಾಗಿ ಅಜ್ಞಾತ ಸ್ಥಳಕ್ಕೆ ಹೋಗಿರೋ ಹಳೇ ಮೈಸೂರು ಭಾಗದ ಮಂತ್ರಿ”, “ಪ್ರಭಾವಿ ಸಚಿವರೊಬ್ಬರ ಸಿಡಿ ರಿಲೀಸ್ “. Also, a photograph of a person is visible in the said screen shot. In another printout of BTV News Channel, there is a similar item, and in yet another it is stated that there are 19 CDs of 19 influential persons in sex scandals, and in another printout it is stated that the CDs may surface any time.

“So, from the above material, it is prima facie seen that although no CDs are released of those claimed in the said news items, it is being sensationalized that there are 19 more CDs of 19 influential persons, and they may be released any time and they pertain to sex scandals and there is even a reference to some ministers. From the said printouts, it is prima facie seen that media houses have still not received any CDs, but news items are being
telecast,” the petition says.

“The ministers are holding high office in the Government of Karnataka, and if unverified news items are telecast or published it goes without saying that the same would cause irreparable injury to their reputation and also cause loss of respect in society and in their own families,” the petition says.

The ministers’ counsel has placed reliance on a decision of the Delhi High Court in the case of Swatanter Kumar Vs. The Indian Express Ltd. and others, decided on 16.01.2014 in IA No.723/2014 in CS (OS) No.102/2014. “In this situation, rather than the right of freedom of expression of the media, they being entrusted with the duty of reporting on public affairs to appraise the citizens, I am of the opinion that the media should walk the extra mile to get news item and its source verified through legally admissible process. Whereupon it should be ready to shoulder the responsibility for such news items and then publish or telecast the same, so as to advance the cause of freedom of expression as well as the right of citizens to know about public affairs. But at this stage, as can be seen from the printouts of the screen shots produced, news items are apparently in the nature of sensationalisation of the unverified material. Not even a clear foundation is available in the said news items,” the petition says.

Going by the submission of the ministers’ counsel, the judge said, “It is necessary to injunct telecasting or publishing of any unverified news items against the plaintiffs/applicants. Therefore, till the next date of hearing, defendants/opponents are hereby restrained by an interim order of temporary injunction from broadcasting, telecasting or publishing, or letting in circulation or posting or accommodating or transmitting or circulating, any defamatory news items, or showing footages and pictures referring to the plaintiffs in relation to the alleged CDs and committing any act or intentional omission which thereby causes character assassination of the plaintiffs on the basis of the unverified material.”

SWR makes its own PPEs for inhouse medical staff