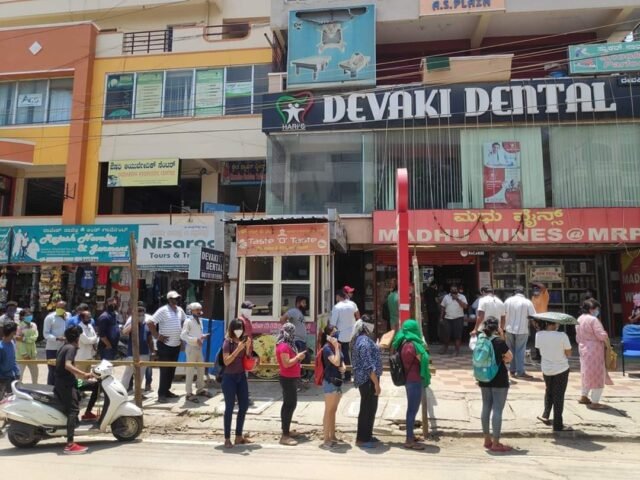 The city’s tipplers could finally wet their tongues as liquor stores opened for business in Karnataka after a long hiatus of nearly 6 weeks. In fact, there were long lines at stores hours before the shutters went up on Monday morning.

Liquor retailers have been shut in the state since March 25 after a nationwide lockdown to combat the COVID-19 pandemic.

During this period, Karnataka has lost excise revenue of around Rs 2,500 crore, according to official sources.

There are around 4,500 standalone liquor outlets (CL-2 and CL-11 licences)in the state, including those owned by state-run Mysore Sales International Limited. Barring containment zones, wine shops  were allowed to open from Monday between  9 am and 7 pm.

Official restrictions include compulsory face masks and social distancing,  with not more than five people allowed inside at a time.

Not only were customers following the mandated precautions, they were also in a celebratory mood. In towns like Hassan, Mandya and Belagavi, poojas were done in front of wine stores and crackers were burst. The Indian spirit of improvisation was in full flow with slippers, bags, stones and what-have-you marking tipplers’ territory in the queue.

Long queues were seen at liquor stores in various localities in Bengaluru.

Store owners were taking no chances, making sure customers wore masks, maintained social distancing and applied hand sanitizers before entering. A good number of cops also ensured that customers observed all the precautions.