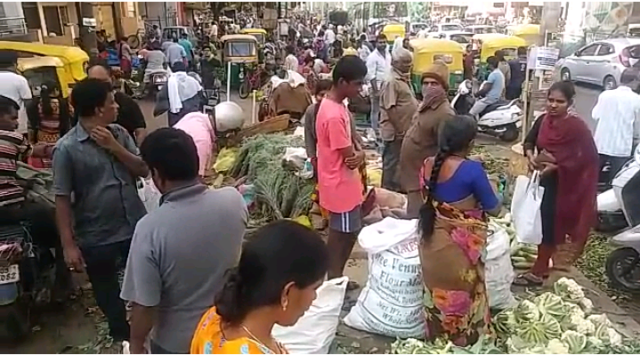 No fear of Sec 144 as crowds make Ugadi purchases

Despite the curfew-like measures, including imposition of Section 144, announced by the state government, markets in Bengaluru were jampacked Tuesday with customers making purchases for Chandramana Ugadi (Gudi Padwa), which falls on Wednesday.

Large crowds were seen at KR Market, Madiwala Market, J P Nagar Sarakki Market, the Jayanagar flower market and several other places. People were seen buying pooja essentials and other commodities. The police were mostly clueless and helpless in controlling the crowds.

As per the lunar calendar, Ugadi marks the New Year for Hindus of Karnataka, Andhra Pradesh, Telangana and Maharashtra. It is celebrated in a big way, including having an oil bath and consuming ‘bevu bella’ (neem and jaggery)

Voicing his concern, Chief Minister BS Yediyurappa tweeted: “In Bengaluru in some places crowds were seen, which will help spread of the infection. People should avoid coming out unnecessarily and should ensure that they come out only to buy essential things. Police have been asked to take strict action against the violators. Government should not be blamed for any action.”

Belagavi tense after Sangoli Rayanna statue is unveiled at midnight

Infosys recognised as the fastest growing top 10 IT services brand

All film-related work allowed except shooting