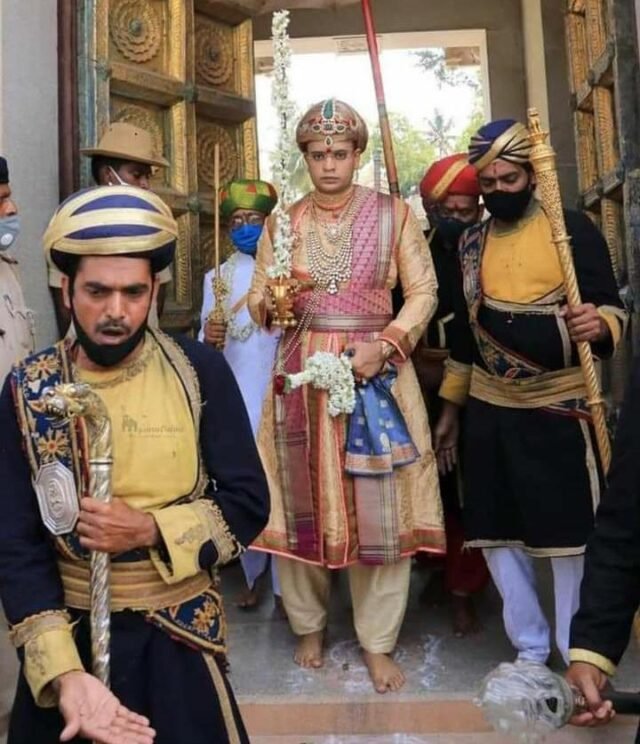 Vijayadashami rituals, which marks the end of Nine day Navaratri festivities was held at Mysore Palace in low key without compromising in the tradition to be followed by the royal family.

Observance of Mysore Dasara Festivities by the Wadiyar Royal Family comes to an end with a royal procession and performing the ‘shammi pooja’ at the Bhuvaneswari Temple inside the palace premises.

Only Royal family members and a very few close relatives participated in the rituals conducted with Scion Yaduveer Krishnadatta Chamaraja Wadiyar who carried the royal sword on the occasion to the temple in a procession in the silver chariot.

The initial nine days also saw the private durbar of the Mysore royal family held to commemorate Dasara festivities, the genesis of which is traced to the celebrations observed by the Vijayanagar emperor in Hampi.

The baton was passed to the Wadiyars who kept alive the tradition with customary rituals adding a dash of colour with the caparisoned elephants, horses, and soldiers participating in a procession.

In the past, the Maharaja used to ascend the royal throne on all the nine days and hold a durbar while the subjects used to pay their obeisance to the ruler Wadiyar, holding the royal sword, entered the temple, and placed it near the ‘shami’ tree and offered pooja to the tree by cutting it in one stroke.

Due to Covid-19 scare the ‘Vajramushti Kalaga” (Wrestling competition) has been cancelled.

The origin of the golden throne, which is the cynosure of all eyes, is obscured in mythology though history traces it to Vijayanagar while a few refer to its Mughal origins. But what is certain is that the throne was handed over to Raja Wadiyar in 1609 and has remained with the Mysore royal family since then.

Descriptions of the king’s procession held after nine days of feasting by Domingo Paes during his visit to the Kingdom of Bisnagar (Vijayanagar) and reckoned to be written in the 1520s. Almost 500 years later, the images of a bygone era unfolded in the precincts of the Amba Vilas Palace to mark the Vijayadashami procession of the royal family of Mysore here today. (Agency)