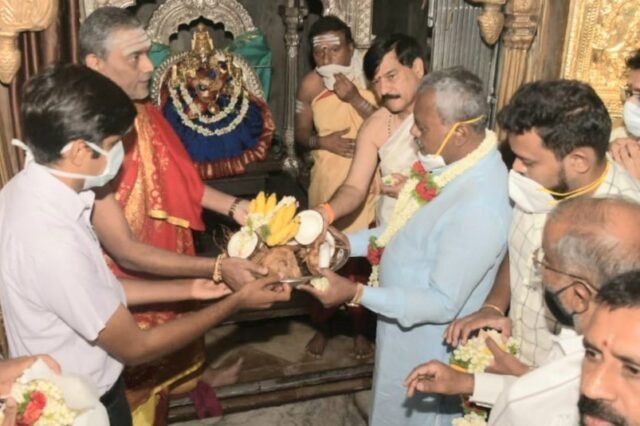 Among the major temples in the state, the Mookambika temple in Udupi and the Manjunantheshwara temple in the city reopened their doors to worshippers on Monday.

Around 200 devotees offered prayers at the Udupi shrine in conformity with social distancing requirements,  sources said. Entry of people above 60 and children below 10 will not be allowed  for the next 15 days.

There was no afternoon ‘oota’ and masks and social distancing were de riguer.  Pre-entry thermal screening of devotees was done and sanitisers were placed at various points.

Also opening their doors were the Chamundeshwari temple atop Chamundi Hill in Mysuru and the Srikanteshwara temple in Nanjangud of Mysuru. However, only a few devotees were seen at the two shrines.

District in-charge Minister S T Somashekar was among those who offered prayers at both the temples.

Somashekar said a decision would be taken on the public darshan of Chamundeshwari on Fridays during Aashada, which commences at the end of June.

Only a handful of devotees were seen at the Rangananatha temple in Srirangapatna, the Chaluvaraya Swami temple in Melkote, the Bhoovarahaswamy temple in KR Pet and other Muzrai temples in Mandya district.

Several mosques in the city had done away with namaz mats and no water was provided for ablutions.

Meanwhile, the Archdiocese of Bangalore has already deferred the opening of churches till June 13.