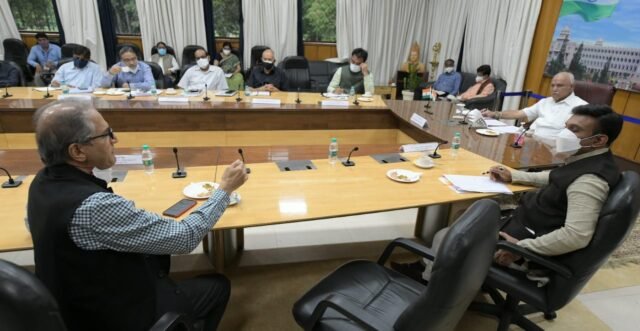 The task force, constituted under Dr Devi Prasad Shetty to prepare for the probable third wave of COVID-19, informed Karnataka Chief Minister B S Yediyurappa on Wednesday that a detailed report will be submitted in a week on preventive measures and treatment facilities required, among others.

Yediyurappa today held discussions with the members of the task force, regarding preparation for the COVID third wave.

Preventive measures to be taken, the infrastructure and treatment facilities required, human resource, medicine etc were discussed during the meeting, the Chief Minister’s office said in a statement.

Task force Chairman Dr Shetty, who is also the Chairman and Executive Director of Narayana Health, informed that a detailed report would be submitted in a week, it said.

Held detailed discussion with experts to chalk out prevention and mitigation plans for the possible third wave of the pandemic. The task force headed by Dr.Devi Shetty will present a report in one week to help the government be prepared. pic.twitter.com/lF79sdmNoQ

‘Chief Minister said that the government would take necessary steps based on this report,’ the statement added.

The Chief Minister later held a separate meeting with senior Ministers and officials regarding COVID-19 situation in the state during which they are said to have discussed the future of lockdown in the state after June 7.

Earlier in the day, Yediyurappa had indicated that strict measures may continue, saying coronavirus has not completely come under control and cases are still high in rural areas.

The state is currently under lockdown till June 7.

It was directed at the meeting to supply oxygen to districts as per requirement, and to focus on containing COVID spread in rural areas, an official release said.

Instructions have also been given to contain the number of fatalities due to black fungus that is increasing, it added. PTI

78 Who Had Been To Delhi’s ‘hotspot’ Mosque Traced