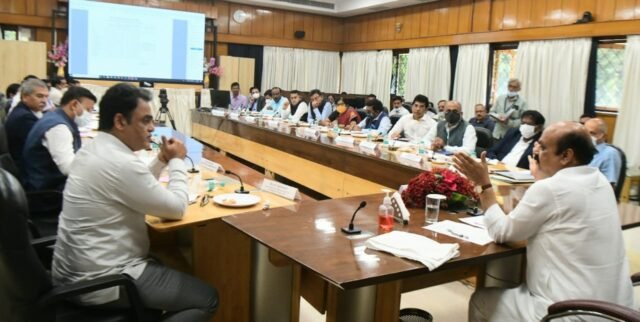 Bengaluru’s global image should not be dented by rain havoc: Bommai

Chief Minister Basavaraj Bommai on Friday instructed officials, including BBMP officials, to take urgent short-term measures as well as long-term measures to prevent flooding in Bengaluru city. The CM’s instructions came at a meeting with officials at his home office ‘Krishna’ to discuss rain-related damage in Bengaluru.

Noting that two more days of rain were predicted for Bengaluru, the CM stressed that every downpour needs to be followed up seriously by officials. He pointed out that Bengaluru has an international reputation and rain-related problems should be resolved expeditiously.

Bommai directed the engineers to identify flood-prone sections, especially in the low-lying areas of the city. “The sewer construction design should ensure that low-lying areas do not get waterlogged. In flood-prone areas, immediate scientific action should be taken. Recharge pits are required every 50 metres in the city,” he said.

‘Speed up desilting of SWDs’

There are currently 64 teams of 15 members each deployed by BBMP to tackle rain-related problems. The CM directed that each team should have at least 30 staff. He also instructed the BBMP Chief Commissioner and Zonal Commissioners to meet every month and report on such issues directly to him.

On Day 1, Gupta gets cracking with recce of rain-hit areas