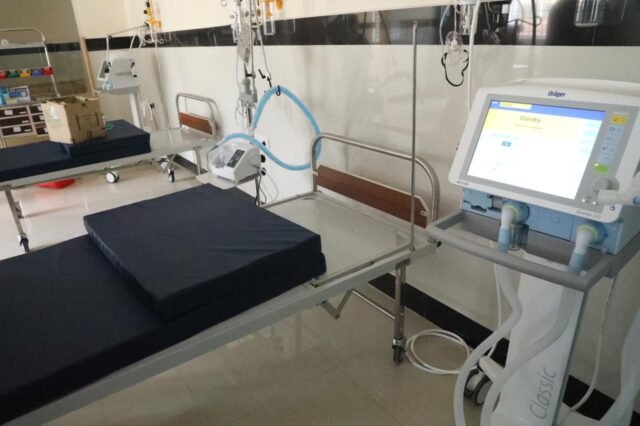 As on March 5, 2021, the Centre had allocated 3,025 ventilators to Karnataka, of which 1,859 are installed – but how many are in Bengaluru or other districts is unknown

Are private hospitals exploiting the crisis and duping BBMP by creating a ‘man-made’ shortage of beds?

Most of our netas, including Chief Minister BS Yediyurappa and Health Minister Dr K Sudhakar, had been alerted by experts of a Covid-19 second wave which could hit in February-end or during March 2021. Now, we are almost at the end of April and Bengaluru – the worst-affected place in Karnataka — is witnessing more than 13,000 positive cases every day while the daily figure statewide is touching 25,000 cases. But our politicians have been deaf and blind to the glaring need to beef up the state’s health infrastructure while there was still a margin of time.

Now that the second Covid wave is a fait accompli, experts have already begun to talk about a third and more catastrophic third wave. But even with all these warning bells, the state government — especially the Karnataka Health Department – continues to be lackadaisical in providing the crucial infrastructure of more ventilators and oxygen beds on a war footing.

Not just Covid patients, even others are in dire distress as a result. In Bengaluru, there are patients with respiratory issues who say they have been turned away by hospitals. “We were denied a ventilator and were told that they have been reserved for Covid-19 patients who might be brought in an emergency. But my father also had severe pneumonia symptoms. We had to look for an expensive private hospital where we got one with great difficulty,” said a patient’s relative, on condition of anonymity.

As on April 22 evening, around 985 patients are in ICUs, out of which Bengaluru has the highest number at 243, followed by 175 in Kalaburagi, 82 in Tumakuru, 51 in Mysuru, 50 in Dharwad, 47 in Davanagere, 44 in Kolar, 43 in Shivamogga, and others. But the media bulletin released by the Department of Health and Family Welfare has not shared data on how many patients are on oxygen or on ventilators.

Ventilators are mechanical breathing machines which are an essential tool in the healthcare system’s response to the Covid-19 pandemic – the recent demand in Bengaluru shows that most of the deaths reported had breathing problems.

Almost all the local Kannada TV channels have telecast stories of patients finding it extremely difficult to find hospitals — both government and private — which have ventilators or oxygen beds.

As per a reply given in Parliament, till March 5 this year, 3,025 ventilators were allocated to Karnataka, out of which 1,859 are installed. But no media house is aware of how many of them are installed in Bengaluru, or in which hospital, or which district.

TheBengaluruLive sent a WhatsApp as well as text message to Health Commissioner Dr KV Trilok Chandra to know the details and status of ventilator beds, but by the time the story was published we had not received a reply from him.

Since June 2020, Karnataka, including Bengaluru, had started witnessing a decline in positive cases. This lulled officialdom into complacence. In fact, the entire administration, including BBMP, slept like ‘Kumbhakarna‘ when Bengaluru began to see just 200 positive cases a day.

“When Bengaluru saw less than 200 positive cases, that was the time for the state Health Department to set up health infrastructure rapidly, especially in Bengaluru, but no one even bothered to focus on the issue. In fact, Health Minister Dr K Sudhakar was only heard talking about issues like a lockdown,” said an expert who has closely monitored the situation.

In fact, the Technical Advisory Committee (TAC) had advised the Karnataka government to impose stringent measures as early as in February this year, but the entire government machinery slept over it – the fallout of which is that now the number of positive cases has risen to around 13,000 per day in Bengaluru. And now in April, to cover up its own omissions, the government is blaming citizens for failing to adopt Covid-appropriate behaviour!

Meanwhile, it is important to clarify the difference between oxygen beds and ventilators. In fact, the issue gained attention after UK Prime Minister Boris Johnson was in April last year admitted in the ICU. It was then clarified that Johnson was on oxygen support and not on a ventilator.

In the current situation in the state, especially in Bengaluru, a majority of Covid patients are in dire need of oxygen support, but there is no end in sight yet to the dire shortages of this crucial life-saving component.

As per experts, a ventilator is invasive, as a tube is introduced into the lungs through the patient’s mouth and throat. The other end of the tube is attached to a machine that pushes air in and out of the lungs. The process of the exchange of gases between lungs and ambient air is known as ventilation in respiratory physiology.

On the other hand, oxygenation is an artificial process of providing oxygen when a patient’s organs or tissues are in a state of hypoxia. Oxygen supply alters the concentration of oxygen in the air we breathe. This means that instead of the normal 21%, a higher percentage of oxygen can be provided to the patient. The patient is still responsible for his/her own breathing. Unlike a ventilator, oxygen therapy will not aid in respiration.

Sources said the Karnataka government should now gear itself to anticipating and controlling a third Covid wave. The government should take steps to establish at least 10,000 oxygen/ventilator beds in Bengaluru and other districts, or else fatalities will go through the roof and the situation, already critical, will really go out of control.

None of us summoned directly: Rakshit

CM to undertake aerial survey of rain-hit areas on Tuesday