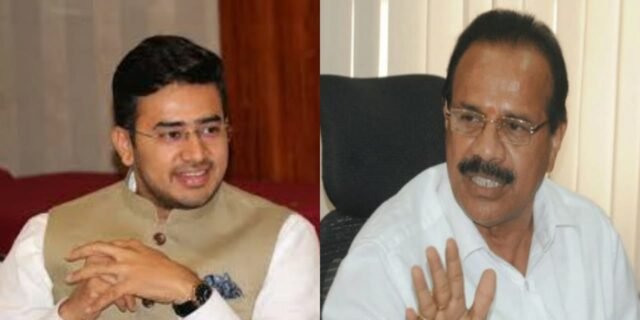 Her mother had reached out to Bengaluru South MP Tejasvi Surya, who tipped off minister

Gowda’s quick response to the request made by Bengaluru South MP Tejasvi Surya, on behalf of the teacher, has saved the life of her daughter Lalitha (name changed upon the individual’s request). Gowda’s instructions to the Drug Controller General of India helped Lalitha obtain an approval — in just 2 hours and in the middle of the coronavirus lockdown last week — to import medicines from her doctor in New York.

Lalitha, a resident of JP Nagar, suffers from fluoroquinolone toxicity, a multi-system ailment because of the consumption of an antibiotic, levofloxacin. On Lalitha’s behalf, her mother, a former school headmistress, reached out to Surya’s office for help.

Lalitha’s mother informed Surya’s office that she had to procure medicines from her doctor’s office in Chappaqua, New York, and transport the same to her home in Bengaluru. To procure the medicines in the middle of the lockdown, cargo companies demanded an ‘import licence’ from the patient.

The woman constantly gets nervous shocks due to the administration of a wrong antibiotic by a doctor in Bangkok. She was administered levofloxacin by the doctor, due to which she suffered  multi-organ nervous failure and is unable to walk properly. The minister’s personal involvement was vital as people have been disabled overnight in reaction to fluoroquinolone toxicity.

Surya informed the minister that Lalitha would require an import licence, as demanded by the cargo companies, to procure homoeopathic sarcode remedies prepared by her doctor to remove toxicities from her body and strengthen her corresponding tissues. Surya also made a request for 3 medicinal oils — Doterra digest Zen, Doterra DDR Prime and Doterra Balance — for her treatment. The woman has been undergoing treatment for the last one year under Dr Savely Yurkovsky, a US-based homoeopathic doctor, for the toxicity.

“Only the homoeopathic sarcode remedies prepared by the doctor, who has a clear idea of Lalitha’s condition, could have prevented multi-organ failure,” Surya said in a statement. “Lalitha could not have considered any other allopathic drugs as her body reacts negatively to all of them. I am grateful to Sadananda Gowda Ji for positively considering the request and getting the import permission for Lalitha in record time. His intervention has saved the life of a Bengaluru woman.

“When we’re in the middle of the lockdown and when each government office is working overtime to address the crisis, the Honourable Minister acceded to this personal request. He requested the Drugs Controller General of India to verify the drugs required and approve them as soon as possible. I must also place my gratitude to the DCGI, Dr VG Somani, for reaching out to the family and approving the import of the medicines upon verification of the prescription – all within 2 hours of receiving the information,” said Surya.

Jaguar Car In Which Actress Met With Accident Had ‘catering’ Pass