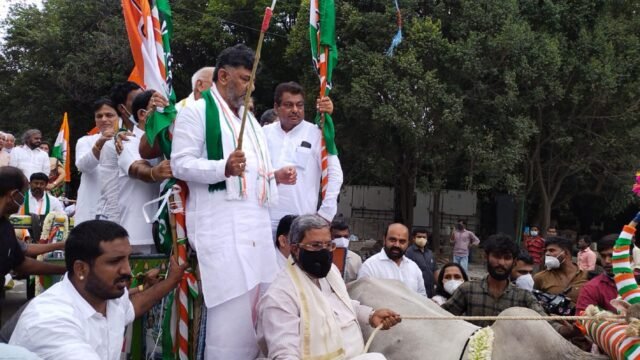 To highlight the rising prices of fuel and other essentials, the opposition Congress led by KPCC chief DK Shivakumar and former CM Siddaramaiah tried to enter Vidhana Soudha on bullock carts on Monday, the first day of the monsoon session of the state legislature.

Shivakumar began his bullock-cart journey from his residence in Sadashiva Nagar, while Siddaramiah joined in from his Kumara Park residence. Others who took part in the novel protest included MLC SR Patil, KPCC Working Presidents Eshwar Khandre and Ramalinga Reddy, and hundreds of party workers.

Speaking to reporters, Shivakumar said ordinary people have been severely hit by the anti-people policies of the BJP government, which was ‘constantly’ raising the prices of essential commodities. “The BJP government is pick-pocketing the people. During these troubled Covid-19 times, the BJP both at the Centre and in the state needs to be solving people’s issues. Instead, they are pouring salt on existing wounds by increasing the prices of essential commodities,” the state Congress chief said.

“This government has no eyes or ears and is insensitive to people’s problems,” he said, adding that the state Congress would protest both inside and outside the assembly.

Addressing reporters near the statue of Kengal Hanumanthiah in Vidhana Soudha, senior Congress leaders raised slogans against the government.