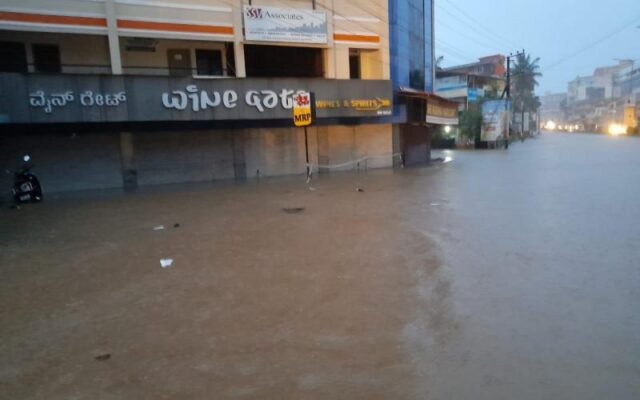 Normal life has been thrown out of gear and vehicular traffic has been disrupted due to the heavy rains whereas landslides and water logging has also been reported from several areas in the twin districts.

Heavy rain continued to lash across Dakshina Kannada since Friday night. A labourer was killed when a compound wall collapsed, at Kuloor. The deceased labourer was identified as Umesh of Neermarga. The work on the extension of the house of Jagadeesh was under progress when the incident occurred.

In another incident, a woman suffered injuries after a compound wall collapsed near Bikarnakatte. The injured woman was identified as Chandrakala Shetty. The wall of a house belonging to Jayalakshmi was in dilapidated condition following heavy rain at Yeyyadi.

IMD has sounded a red alert in Dakshina Kannada for three more days. As high tides are likely to lash the coast, the fishermen were advised against venturing into the sea for deep-sea fishing. With the rise in Nandini and Shambavi river water, the paddy fields at Athooru Panja, Kilenjooru, Pavanje, Kadike and Sasihithlu have been inundated.

Meanwhile Several places in the Udupi district have been affected by heavy rainfall, leading to the closure of roads at Kalsanka Manipal, Gundibail, and Malpe. Areas such as The Ambalapadi, Gundibail, Bannanje, Kaup, and several other regions have been severely affected by flooding.

According to the District Collector, G Jagdish, 50 families have rescued from the region so far. The Udupi Police and Fire Service Department have been busy with rescue operation since Saturday night and the NDRF Team have also been summoned to aid these operations. The District Collector has directed the citizens affected by the extreme weather to contact the emergency number 1077, to receive help from the assigned control room.

The parking area at Udupi Krishna Mata and the city’s national highway routes have been completely waterlogged due to the heavy rains. Several shops and godowns in the district have been flooded.

Extreme rainfall has resulted in the sinking of 3 boats, causing heavy damages ranging in lakhs of rupees. During this ordeal, the fishermen managed to rescue themselves by seeking refuge in the rocks and boulders by the sea.

The road at Gundibail has worsened due to the rains. Udupi-Manipal main roads have deteriorated, while many shops and houses at Badagupete have experienced flooding.

Due to the drop in air pressure at the Bengal Sea, as recorded on September 20, a torrential rainfall accompanied by thunder is expected to continue till September 22.

The coastal and highland regions of the state are expected to bear the brunt of heavy rains due to which a red alert has been issued.

Udupi, Uttara Kannada, and Dakshina Kannada districts are expected to receive heavy downpour accompanied by thunderstorms from September 20 to September 22 as per the
forecast released by the Department of Meteorological department In the mean time due to heavy rainfall and huge inflow to Kabini reservoir at Beechanahalli in HD Kote taluk in Mysuru district, the outflow of the dam has increased to 35,000 cusec on Sunday morning.

The authorities of Cauvery Neeravari Nigam Limited issued flood alert to the downstream villages. The water has reached its maximum level of 2284 feet, with 12,208 inflow. (Agency)