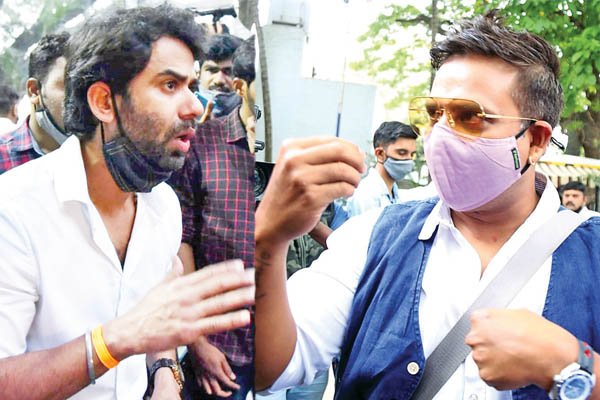 Former corporator RV Yuvraj, Akul Balaji and Santosh came for questioning to the CCB office in Chamarajpet at 10.30 am on Saturday. They were grilled for 6 hours by Joint Police Commissioner Sandeep Patil, DCP Ravikumar, ACP Gautam and Inspector Puneeth.

According to the cops, the Sunrise Resort of Akul Balaji near Leggamanahalli in Doddaballapur taluk was leased to drug accused Vaibhav Jain.  A villa belonging to Santosh near Devanahalli was also allegedly given out for rave and dance parties.

The trio were questioned about Vaibhav Jain’s association with Aditya Alva.

Speaking to the media later, Akul Balaji said Vaibhav Jain was his ‘friend’, “but I do not have any business contact with him. This may have resulted in the CCB sending a notice to me.” He added, “I have answered all their questions. Whenever required, I shall be present for further enquiries. I will cooperate with the police investigation.”

According to the cops, Vaibhav Jain was working on accused Viren Khanna’s instructions. Many places in the city were rented for drug parties, and Jain would bring actresses to the parties.

According to the cops, Jain had ‘quarrelled’ with Santosh over his villa’s rent. After this, Akul had offered his resort, and a rental agreement was being prepared when Vaibhav was arrested.

I am not an addict: Santosh

Santosh told the media he had rented his Airport Road villa to Vaibhav but cancelled it later because of his illegal activities. “Now I have nothing to do with him. The CCB may have given me a notice because of the agreement for the villa. I got to know he was a big drug peddler  after he was arrested. I have no association with any drug peddler, and I am not an addict. I will cooperate with the police investigation,” he said.

According to the cops, RV Yuvraj was a close friend of Vaibhav and had been invited to parties several times.

Liquor sales now from 9 am to 9 pm