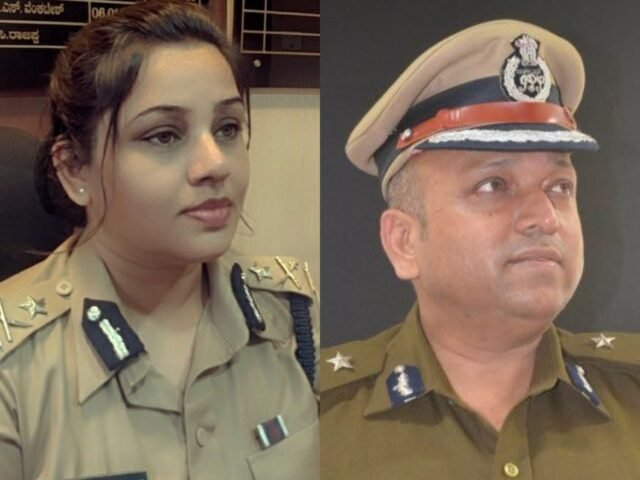 In letter to Chief Secretary, Home Secretary D Roopa demands removal of complainant Hemant Nimbalkar from any role in Safe City project as he is an accused in Rs 4,500-crore IMA scam

Karnataka’s Home Secretary, IPS officer D Roopa, who is known for speaking her mind, has come down heavily on fellow-IPS officer Hemant Nimbalkar, who is Additional Commissioner of Police (Administration), and has demanded his removal from the Rs 1,067-crore Safe City project.

Roopa has referred to Nimbalkar as an accused in the Rs 4,500-crore IMA scam who has been chargesheeted by the CBI. The lady officer shot off a two-page letter addressed to Chief Secretary TM Vijay Bhaskar after a news report was published in the Times of India on December 25 claiming that ‘an IPS officer had impersonated as Home Secretary to know the tender details..’. She says the root of the false communication by Hemant Nimbalkar in the context of the Nirbhaya or Safe City project lies in the fact that he is chairman of both the tender inviting committee and the tender scrutiny committee of the project, in which an unfair and biased tender was drafted to favour a particular vendor.

In her 10-point letter, Roopa has demanded removal of Nimbalkar from the Safe City project. She goes on to say that she will continue to discharge her duties as a conscientious officer in the public interest. She has also said it was shocking to see the front-page TOI report  about Hemant Nimbalkar alleging impersonation of the Home Secretary by a lady IPS officer in a phone call to Ernst & Young (E&Y) in the context of the Safe City project.

The following are the points in her letter:

1. Hemant Nimbalkar, IPS, is an accused in the Rs 4,500-crore IMA scam and stands chargesheeted by the CBI.  It is pertinent to note that only after I joined the Home Department that the sanction for his prosecution happened.

You would remember that I had personally brought to your knowledge that despite the High Court Chief Justice monitoring the case and the CBI seeking prosecution sanction in December 2019, the same had not been granted. Only subsequent to this submission by me was the sanction of prosecution granted by the government in September 2020.

2. In the above background, the root of the false complaint by Hemant Nimbalkar to you in the context of  the Nirbhaya or Safe City project lies in the fact that he is Chairman of both the Tender Inviting Committee and the Tender Scrutiny Committee of the Rs 1067-crore Safe City project, in which an unfair and biased tender was drafted to favour a particular vendor.

3. Bharat Electronics Limited (a Navratna Govt PSU) was wrongfully disqualified in the tender by the tender scrutiny committee and the tender was sought to be given to a particular vendor.  BEL complained to the Prime Minister’s Office and this led to cancellation of the biased tender.

4. I am the Home Secretary and there is no impersonation as falsely alleged in the complaint by Hemant Nimbalkar IPS.

5. The file on the Safe City project was given to me by the Addl Chief Secretary, Home Dept, himself to study. While studying it I found serious irregularities in the tender drafting. In this context, I spoke to Ernst & Young in my capacity as Home Secretary to ascertain more facts on the matter.

6. In fact, I have attempted to blow the whistle on the biased and unfair tender by bringing it to your notice at that time itself, which led you to invite you to the next Safe City project meeting.

7. My presence in the Home Department is detested by those who have a vested interest in the tender and this has led to the false and motivated complaint by Hemant Nimbalkar to you.

8. Hemant Nimbalkar, despite being a chargesheeted accused by the CBI in the Rs 4,500-crore IMA scam and having a biased and unfair tender favouring an individual vendor, continues to head the tender inviting committee and the tender scrutiny committee.

9. The government needs to remove Hemant Nimbalkar from the Safe City project and conduct an enquiry on the said biased and unfair tender. The whistle blower, IPS officer D Roopa, needs to be protected by the government.

10. I have made every effort in this case in bonafide discharge of my duties as a public servant to safeguard public interest and public money.

Roopa concludes her letter by saying, “Hemant Nimbalkar would have it that even when the Home Secretary to the Government of Karnataka sees serious irregularities, she is supposed to keep quiet on them. Hence, the whole complaint and leaks to the media are aimed at falsely scandalizing and demoralizing me. However, I will continue to discharge my duties, upholding public interest in every action of mine like a truly conscientious officer.

TheBengaluruLive tried calling Nimbalkar for his reaction to Roopa’s letter addressed to the Chief Secretary, but he did not respond to our calls or WhatsApp message.