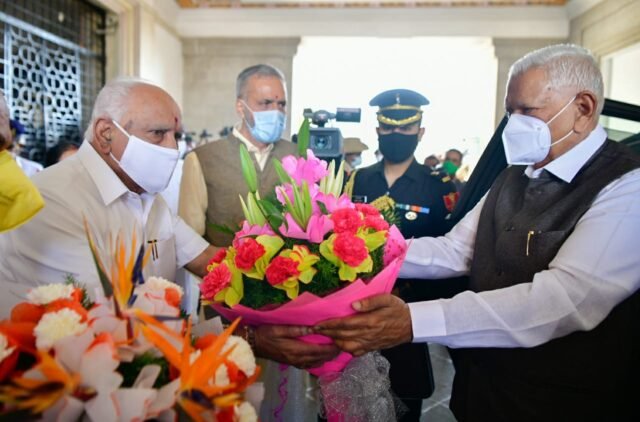 Opposition Congress on Thursday staged a symbolic protest during the joint sitting of Karnataka legislature, accusing the BJP government of ”neglecting” the northern districts, even as Governor Vajubhai Vala lauded the state administration over its “achievements” amid COVID pandemic.

As Governor Vala began his customary address to the joint sitting of the state legislature, Congress legislators led by their leader Siddaramaiah rose up holding placards for a couple of minutes, before they sat down and listened to the speech peacefully until completion.

In the placards, Congress MLAs charged the government with ”neglecting North Karnataka by not holding a legislature session in the border district of Belagavi.

Legislature session is held once a year at Suvarna Vidhana Soudha in Belagavi, modeled on the Vidhana Soudha, the state secretariat in Bengaluru.

The Governor in his address said his government has tried its best to mitigate the adverse impact of COVID-19. “We have used the crisis as an opportunity, to build on our strengths, to create additional health infrastructure and enhance production capacity (of medical equipment).” Despite the challenges and the hardships imposed by the pandemic, the achievements of my government are noteworthy, he added.

Listing out the various achievements and reform measures undertaken by the state government, the Governor said “my government has declared a war on drugs, considering its adverse impact on the society, especially youngsters.” Highlighting the government”s handling of the flood situation in the state, he said, in total Rs 1,345 crore has been released for flood relief.

He further said despite the current challenges, the government has collected Rs 30,467 crore through commercial taxes and Rs 16,788 crores through excise department to ensure smooth funding of development programmes of the state. PTI

Sasikala shifted to hospital after complaining of fever and breathlessness