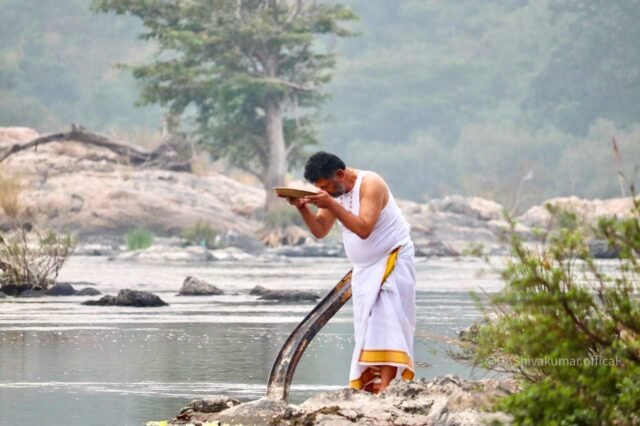 The Congress in Karnataka on Sunday began its 10 days ‘padayatra’ (march), demanding implementation of the Mekedatu project across the Cauvery river, despite the government’s COVID-19 restrictions.

Led by Congress’ state president D K Shivakumar and Leader of Opposition in the State Assembly Siddaramaiah, the padayatra with the theme ‘Namma Neeru Namma Hakku’ (Our water, Our right) began at the Sangama, the confluence of Cauvery and Arkavathi rivers in Kanakapura here, which will be spanning a distance of over 100 km.

With participation from hundreds of workers, leaders and cultural groups, the principal opposition party in the state is going ahead with the march, as planned, unfazed by the government’s warning of action in case of violation of COVID restrictions and rules.

It now remains to be seen what action will the government take, with large number of people gathering in violation of rules and orders.

The Karnataka government has imposed curfew on weekends and restricted public gatherings to fight the third wave of COVID-19, till January 19. It has also imposed night curfew, and has prohibited all rallies, dharnas, protests, among others.

Congress has maintained that it will hold the padayatra following COVID rules and guidelines Leader of Opposition in Rajya Sabha Mallikarjun Kharge, Shivakumar, Siddaramaiah, former Chief Minister Veerappa Moily, and almost all the senior party leaders and legislators were present at the inaugural of the padayatra, that is likely to cove a distance of about 15 km on the day one.

Some religious leaders and film personalities like actor Duniya Vijay, actor and music director Sadhu Kokila, were among others seen at the inaugural.

Projecting it as an apolitical ”Walk for Water,” the Congress has invited seers of various mutts, organisations, leaders of various political parties, film personalities, Karnataka Film Chamber of Commerce, among others to take part in the march.

Accusing the BJP government of trying to scuttle the padayatra, Siddaramaiah accused the ruling BJP of colluding with Tamil Nadu in delaying the implementation of Mekedatu project.

Claiming that the project was initiated by the Congress government led by him, he alleged that the ruling BJP has betrayed the people of the state by not getting environmental clearance despite being in power for last 2.5 years, and even accused the central government of not giving clearance, as the saffron party wants to expand its base in neighbouring Tamil Nadu.

”This padayatra is for getting water to Bengaluru and surrounding areas by implementing Mekedatu project, there is no stay for the project by courts or tribunals or Cauvery Water Management Authority…..Our padayatra will not stop, let how much ever the BJP try to stop it,” he added.

Shivakumar, who is also MLA from Kanakapura, hitting out at Chief Minister Basavaraj Bommai for trying to ”thwart” the padayatra by asking the district administration to issue prohibitory orders, he dared him to arrest them if he could.

”This march is not for the Congress party or for the sake of power, it is for the sake of the people…. Like Congress fought against the British then for India’s freedom, today we are fighting against BJP and Janata Dal…. SP (Superintendent of Police), Home Minister- you have issued orders against the law, we will not fear it….we will peacefully march following COVID rules,” he added.

The Congress’ march from Mekedatu to Bengaluru, covering about 15 of the 224 Assembly constituencies in the state, is demanding implementation of the Mekedatu project, which is being opposed by neighbouring Tamil Nadu.

Beginning at Sangama the padayatra is scheduled to pass through Kanakapura, Ramanagara and Bidadi, before culminating at Basavanagudi in Bengaluru on January 19.

Though the padayatra is being projected as apolitical, demanding the implementation of Mekedatu project, it is also seen as Congress’ attempt to mobilise its cadres and consolidate its voter base in the old Mysuru region, which is a Vokkaliga bastion, where JD(S) is its traditional rival and the ruling BJP is attempting to make inroads, ahead of 2023 assembly polls.

Much is at stake for Shivakumar, the man behind this march, as several Congress functionaries believe that it is an attempt by the KPCC chief, ahead of assembly polls, to assert his Chief Ministerial ambitions, for which Siddaramaiah is also a strong contender. The party has seen several incidents of political one-upmanship between the two leaders last year.

Shivakumar took a dip in the river and performed pooja at the Sangam ahead of the padayatra’s inaugural.

Both ruling BJP and JD(S) have hit out Congress calling its march as a ”political stunt” ahead of assembly election next year, and has questioned its morality, accusing the grand old party of not putting any efforts to take the project forward while in power.

Chief Minister Basavaraj Bommai has maintained that his government was committed to implement the project.

Karnataka government submitted a Detailed Project Report (DPR) to the Central Water Commission (CWC) in 2019, which was then referred to the Cauvery Water Management Authority (CWMA), where it is stuck currently as Tamil Nadu which is the lower riparian state, has opposed the project tooth and nail.

Karnataka has maintained that the project within its territory will benefit both states as the surplus water stored can be managed between the two during the distress year, and its implementation will in no way affect the interests of Tamil Nadu’s farming communities, as there will be no impact on its share of water.

While the neighbouring state is of the view that the project would ”impound and divert” the uncontrolled water flow due to Tamil Nadu from Kabini sub- basin, the catchment area below Krishnarajasagara, and also from Simsha, Arkavathy and Suvarnavathi sub-basins besides other small streams. The Mekedatu multipurpose (drinking and power) project, which involves building a balancing reservoir, near Kanakapura in Ramanagara district of Karnataka.

The project once completed is aimed at ensuring drinking water to Bengaluru and neighbouring areas (4.75 TMC) and also can generate 400 MW power, and the estimated cost of the project is Rs 9,000 crore. PTI

Move to lease out Mysugar on hold: Karnataka CM