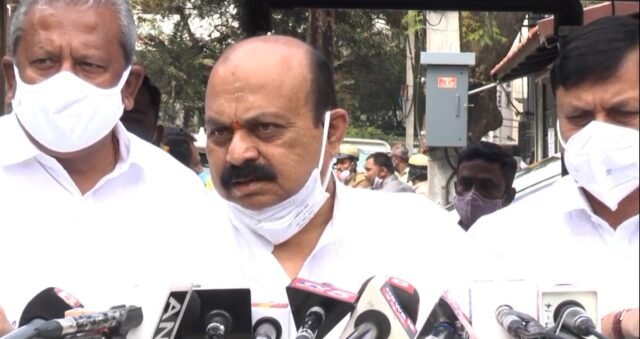 Karnataka Chief Minister Basavaraj Bommai on Sunday said action will be taken in accordance with law, as he hit out at Congress leaders for going ahead with ‘padayatra’ (march), demanding implementation of the Mekedatu project across the Cauvery river, by violating government’s COVID-19 restrictions.

The Chief Minister also accused the grand old party of playing politics on the Mekedatu issue, instead of behaving like a responsible opposition.

”I have called a meeting of important leaders of our party and senior Ministers, where we will discuss several issues including Bengaluru development, Mekedatu project and the padayatra,” Bommai said.

Speaking to reporters here, he said, Congress is fully aware of the consequences of what they are doing, but politics seems to be more important for them.

”When cases regarding the project are pending, as a responsible political party, who have been earlier in power, and being fully aware of the system, the law, what inter-state water dispute is, court and tribunal orders, they should not have gone ahead with the padayatra, but politics seems to be important for them, people will decide,” Bommai said.

Regarding violation of COVID norms, a notice has been issued to them and officials have personally advised them against it, he said, adding that ”but they have neglected it and are going ahead, we will take action in accordance with law.” The Congress today began its 10 days padayatra from Mekedatu to Bengaluru, despite the government’s COVID-19 restrictions and warnings.

Led by Congress’ state president D K Shivakumar and Leader of Opposition in the State Assembly Siddaramaiah, the padayatra with the theme ‘Namma Neeru Namma Hakku’ (Our water, Our right) began at the Sangama, the confluence of Cauvery and Arkavathi rivers in Kanakapura in Ramanagara district, which will be spanning a distance of 139 kms.

Hitting out at the Congress for the padayatra, the Chief Minister accused it of not putting any efforts to take the Mekedatu project forward while in power as it lacked commitment.

The Congress did not take up the issue during the last three years, but are now doing a political padayatra ahead of the 2023 Assembly elections, Bommai said, adding ”they are suffering with guilty consciousness, hence they are trying to misguide the people. It is purely politically motivated Congress padayatra.” Pointing out that the Congress had organised a similar padayatra in the past, regarding Krishna river and made several promises, but failed to fulfil it while in power, he accused them of misguiding the people and that the public will not fall for it.

The Mekedatu multipurpose (drinking and power) project, involves building a balancing reservoir, near Kanakapura in Ramanagara district of Karnataka, to which neighbouring Tamil Nadu is vehemently opposed to.

The project once completed is aimed at ensuring drinking water to Bengaluru and neighbouring areas (4.75 TMC) and also can generate 400 MW power, and the estimated cost of the project is Rs 9,000 crore.

Further noting that the BJP is committed to implement the project and after it came to power the DPR has gone from Central Water Commission (CWC) to Cauvery Monitoring Board for approval, the Chief Minister said, a meeting is likely to be held this month during which decisions may be taken.

”Cases regarding the project are also likely this month in the Supreme Court, we are following with our legal team. We are also working regarding environmental clearance,” he added.

Meanwhile, expressing dismay that the Congress leaders were behaving in a very irresponsible manner, by undertaking a Padayatra, and not heeding to the fear of spreading the COVID disease, Home Minister Araga Jnanendra said that the law will take its own course for violating the restrictions.

Informing that the district administration will take appropriate actions in maintaining peace and law and order in the district, he denied that the government has softened it’s stand on the padayatra.