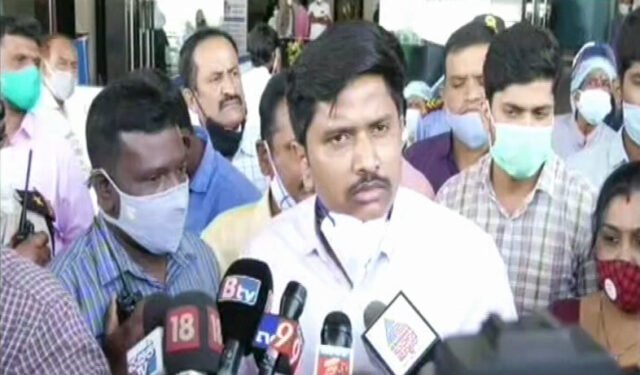 He was admitted to MS Ramaiah Hospital last Friday allegedly due to an overdose of sleeping pills.

Speaking to media after discharge from the hospital, he said that “three days back, there was a personal, family event. It was my cousin brother’s marriage. There, I suffered from food indigestion. I ended up taking a different medicine and due to an overdose, I got drowsy. My wife rushed me to the hospital. This was just a mistake,”

“I do have the habit of taking sleeping tablets. I usually take 0.2 mg and I should have consumed a half tablet. Instead, I took a full one that made me drowsy,” he added.

I’ve seen the FIR. Where does it say 12 tablets,” he asked. When reporters showed the FIR copy, Santhosh clarified, “FIR means ‘first information received’. Once I gained consciousness, I gave the right answer.”

Santhosh, who is Yediyurappa’s grand-nephew, said there was no political pressure on him. “Let me tell you, there’s always political pressure, but I’m not someone who’d take pills because of it,” he said, adding that there was no pressure on him to resign. I am not depressed. I have strong will power. The wrestling ring in which I grew up will keep me strong for the next fifty years,” he said.

Referring to KPCC President DK Shivakumar claiming that he had a video about Santhosh’s suspected suicide, he said, “It’s not the first time Shivakumar has spoken like this. Earlier, he claimed I had some diary. Maybe he has lost his mind after the Rajarajeshwarinagar bypoll defeat. He should get admitted to a hospital or take a break.”

Threatening Shivakumar with protest, Santhosh said that he would mobilize a lakh people in Bengaluru if anything bad was spoken against Yediyurappa. (Agency)

Devotees Not to Be Allowed into Sabarimala Temple This Month Also: Kerala Govt