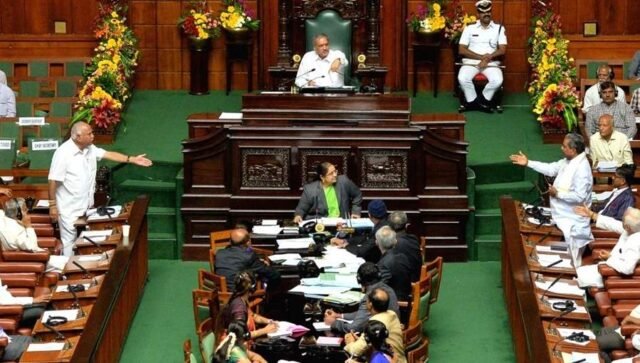 Amid a walkout by the opposition Congress and JD(S), the Karnataka assembly on Saturday approved the amendment to the Agricultural Produce Marketing Committee (APMC) Act, which allows private players to directly approach farmers to purchase agricultural produce.

Both Congress and the JD(S) alleged that the government was succumbing to the pressure of corporates and multinational companies. Leader of the Opposition Siddaramaiah said the private secretary to Union Home Minister Amit Shah had on May 4 2020 written to the state government, asking it to introduce bills to amend the APMC and labour reforms “Farmers have not demanded the bill,” he said.

The government, instead of ‘handing over’ the future of farmers to corporates, should strengthen the Agricultural Produce Marketing Committees, he said.

JD(S) leader and former Chief Minister H D Kumaraswamy said the Bihar government had scrapped APMCs in 2006, leaving farmers to directly deal with the traders. This decision left the farmers in the lurch as they did not get a proper market, he alleged. “The information I have is that the farmers there are forced to sell their produce in Punjab and Haryana,” Kumaraswamy said.

Minister for Cooperation S T Somashekar said the amendment was necessary because farmers and traders were being ‘harassed’ by traffic police and vigilance department officials. “The amendment will enable anyone with a PAN Card to do business with farmers. The growers will not face any problems,” he said. Assuring members that the government would not allow any ‘injustice’ to happen to the farmers, Somashekar moved the bill and it was passed with a voice vote. The opposition then staged a walkout, shouting slogans against the government.

The government had moved two important amendment bills pertaining to the agriculture sector — Amendment to the Karnataka Land Reforms Act and the APMC Act, in this session. The opposition parties had demanded that the government not table the bill separately and individually, but together as both are interrelated and should be discussed elaborately.

The government obliged and took them up for discussion on Saturday. The amendment to the Land Reforms Act enables any individual purchase agricultural land, whereas the APMC Act allows farmers to sell their produce directly to private players. (PTI)