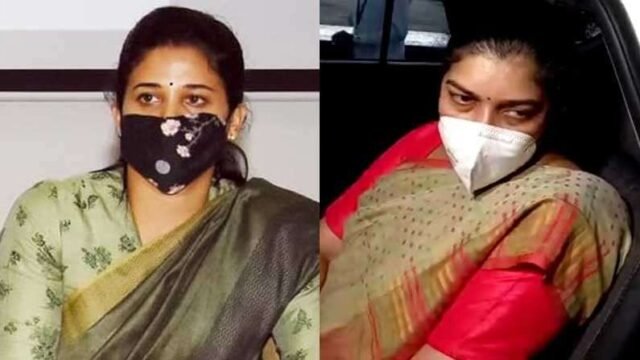 Rather than trying to figure out who is in the right in the unseemly verbal war between the two leading IAS lady officers of Mysuru district, Deputy Commissioner Rohini Sindhuri and Mysuru City Corporation Commissioner Shilpa Nag, the Karnataka government has apparently taken the easy way out by deciding to transfer both Sindhuri and Nag.

TheBengaluruLive has learnt from a top bureaucrat that both transfers will be effected soon. On Friday afternoon, Chief Secretary P Ravi Kumar was in Mysuru to review the Covid-19 situation, and according to sources did not accept Shilpa Nag’s resignation which she had announced during a presser on Thursday. Nag had then released a handwritten and unsigned resignation letter but had also prepared a typed and signed resignation letter to be submitted directly to the Chief Secretary.

Sources had earlier said that the Chief Secretary’s visit to Mysuru was meant to broker peace between his two warring subordinates, and that neither of the two would be transferred out of the district.

In all this, the real issues like whether the Mysuru City Corporation Commissioner was under pressure to execute her Covid-19 duties, or whether the Mysuru Deputy Commissioner failed to lead the administration, are likely to go unanswered, even as the politicos of Mysuru, who had taken a pronounced position against Sindhuri, will have the last laugh.

Rohini Sindhuri’s stand is evidenced by three letters (copies available with TheBengaluruLive) sent to her junior seeking a clarification regarding Nag’s failure to open two Covid Care Centres in Mysuru city. The letters are yet to be answered, although Shilpa claims she has responded to them.

Two of the letters from Sindhuri were sent on June 2, following which Shilpa spoke to the media on June 3 announcing her resignation. Another letter from Sindhuri was sent on June 1, asking Nag to submit details of medical equipment acquired under CSR funds.

Sindhuri’s June 1 letter noted that Nag was made nodal officer to track medical equipment donated by various companies from their CSR funds. The letter alleged that all the medical equipment was not handed over to Covid Care Centres in the district limits, to Covid Mitras, and to other government hospitals, but all of it was distributed in the Mysuru City Corporation limits. The letter went on to say that as the rural parts of Mysuru did not get the equipment, “hence, submit the details of medical equipment available in your office immediately.”

In another letter on June 2, Sindhuri objected to unsigned data shared by Nag relating to Covid-19 positive cases, discharges, deaths and active cases in the Mysuru Corporation limits. The letter said, “You had been directed that MCC needs to submit correct and up-to-date ward-wise data on new Covid-19 cases, discharges, deaths and active cases. This is critical for proper action on Covid-19 control and management in the city, and establishment of Covid Care Centres and follow-up with the patients and their families.”

Sindhuri reminded her subordinate thus, “It is directed that you shall everyday by 5 pm submit the ward-wise data on new Covid-19 cases, discharges, deaths and active cases under your own signature to the District War Room. This direction is issued under the Disaster Management Act 2005.”

The Mysuru Deputy Commissioner has alleged that Shilpa Nag was issuing factually wrong statements on Coivd-19, which were misleading.

“Further, a press report reveals that you have blamed the district administration for your failure to open Covid Care Centres from the government side in Mysuru City. This failure forces patients to continue to avail of private hospital facilities at exorbitant rates. The non-opening of CCCs in the last 15 days, despite being told to do so, has led to denial of facilities at the most critical time of Covid-19. You may note that during the same time, 15 CCCs were opened in rural areas/taluks.

“You are directed to be factually correct in each of your statements, particularly to the press as well as in official meetings. Your explanation on the said wrong statements may be submitted to the undersigned within 2 days,” Sindhuri’s note said.

Reacting to Sindhuri’s allegations, Shilpa Nag, who has been working with Sindhuri since the last 108 days (as on Friday), said there is a “limit to everything”. “It is now all over. There are no working conditions in Mysuru. Rohini does not have any control over the war room and people working there are also not trained properly,” she told TheBengaluruLive.

“We are in a pandemic situation and it is a team effort. As administrative head of the district and head of district disaster management, Rohini has access to the ICMR portal for details of Covid-19 positive cases. She cannot blame me for not sharing case details as we are getting details from her, which are again shared with her. I had asked for access to the ICMR portal so that we can work together, but nothing has changed,” Shilpa alleged.

Shilpa said, “I have studied BBMP’s module which is working perfectly in bed allotment, with tele callers talking to home-isolated Covid patients.” She alleged, “But no such system is adopted in Mysuru and everything is tossed up. Tele callers are not aware that they have to talk over the phone with home-isolated people. There was no proper hiring done. The Deputy Commissioner also is not aware where food kits and medical kits are being distributed. We have taken the help of CSR funds to distribute all these items and, moreover, more than 70 doctors were hired by Mysuru City Corporation and Mysuru Urban Development Authority to advise home-isolated people. The district administration did not procure medicines and hand it over to the corporation.”

According to Shilpa, the Deputy Commissioner did not chair any meeting on CSR funds despite being head of the district administration. “After the Chamarajanagar tragedy, it was I who took the initiative and held discussions with companies and factories to come forward to provide services under their CSR. When everything started falling in line, I updated her on everything. Later, she issued an official communication appointing me as CSR nodal officer,” Shilpa said.

Shilpa alleged that the wrong policies adopted by Sindhuri had resulted in Covid-19 cases shooting up in Mysuru. “There was no proper communication from Sindhuri. She had all the access to the ICMR portal. Mysuru Corporation was ill-informed about the fresh Covid-19 cases reported in the city. In fact, the Corporation was informed after nine days of new positive cases being reported. Under such circumstances, it becomes difficult to track, trace and treat cases or to search for primary and secondary contacts, which results in more positive cases and less treatment,” she said.

The Mysuru City Corporation Commissioner said, “We could have easily adopted BBMP’s module to trace positive cases and their primary contacts, but it was poor management in the war room. I don’t understand why she (Sindhuri) was behaving like this and ignoring the health of Mysuru’s taxpayers.”

Containment zones in Bengaluru triple in a week to 1,423

Its official: Bengaluru to have 243 wards