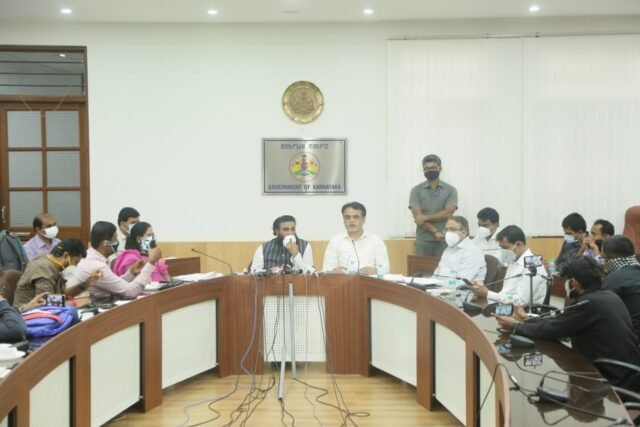 The state government on Monday dismissed charges of irregularities in the purchase of medical equipment for treatment of Covid-19 patients.

In a point-by-point rebuttal, Deputy Chief Minister Dr CN Ashwath Narayan and Health Minister B Sriramulu said that the charges of irregularities to the tune of Rs 2,200 crore raised by Opposition leader Siddaramaiah were “far from the truth”.

According to them, the government has so far spent just Rs 290.60 crore. Besides this, the Medical Education department has spent Rs 33 crore.

The former chief minister had made these charges against the government out of frustration from losing power, the duo alleged.

The two, flanked by Additional Chief Secretary Jawaid Akthar and head of Karnataka State Drug Logistics Warehousing Society N Manjushree, said the difference in prices quoted by different companies was due to different specifications of ventilators.

Govt: We have spent only Rs 10.61 crore on ventilators

Govt: We have spent just Rs 79.35 crore. Prices of PPE kits with four components, six components and 10 components varied.
Orders were placed with companies recommended by the Centre. Now the cost of PPE kit is Rs 3,900 each

The government purchased N95 masks at a variable price band due to short supply and high demand. Now the price of N95 has come down to Rs 44.75.
In all, the government has spent Rs 11.51 crore for the purchase of N95 masks.

Even in the purchase of sanitisers, the government has so far spent only Rs 2.65 crore for one lakh bottles of 500 ml each.
After this, we have not purchased sanitisers and are mobilising it through CSR activities from distilleries and sugar factories, the ministers said.

The government had placed an order for three lakh gloves at a price of Rs 9.50 per piece. Of this, only 30,000 were delivered, costing the state Rs 28.5 lakh.

The government headed by Chief Minister BS Yediyurappa and all ministers are working hard to contain the pandemic, the Health Minister said.

“Even if a single charge is proved, I will resign,” he said. He ruled out a probe as there was a ‘huge difference’ between the actual money spent by the government and the charges levelled by the Opposition leader.