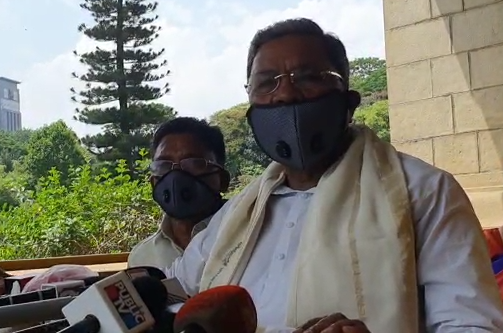 Former Chief Minister Siddaramaiah on Tuesday suggested the Karnataka government can allow sale of liquor in green districts that have no active cases of COVID-19, with certain restrictions.

The Leader of Opposition in the Assembly also demanded that the state government announce a “special package” for unorganised sector workers, street vendors and autorickshaw drivers, among others, all daily wagers whose lives are affected by lockdown.

“Merely because there is an economic slowdown in the state, I don”t recommend that alcohol should be allowed to be sold. But, wherever there are green districts, they can open (liquor shops) with certain restrictions, I think that they can do,” Siddaramaiah told reporters in response to a question.

There are 14 districts in the state that are categorised as green, they include- Yadgir, Raichur, Koppal, Haveri, Davangere, Shivamogga, Chitradurga, Udupi, Chikmagalur, Hassan, Kodagu, Chamarajanagar, Ramanagara and Kolar.

Despite pressure to kickstart economic activities to boost the state”s finances by allowing sale of liquor and excise department too suggesting regulated sale through state-run MSIL outlets, the Chief Minister B S Yediyurappa led government did not go ahead with it, following the Centre”s guidelines and as it may lead to crowding at shops.

Siddaramaiah also demanded that a special package needs to be announced for unorganised sector workers, street vendors and autorickshaw drivers, among others.

Alleging that the government has failed to control the spread of coronavirus, he said it is the government”s responsibility to take care of the basic needs of those from the unorganised sector, whose lives have been impacted by the lockdown.

“It is the duty of the government and they should do it immediately. The package should also be announced. I will hold discussions with leaders of other opposition parties like JD(S), CPI, CPI(M) and BSP in this regard and also on trouble faced by farmers,” he added.

Alleging discrimination in supply of food packets and ration kits, Siddaramaiah said it was being supplied properly only in constituencies represented by BJP legislators.

“Politics is being played out in supply of food materials to the needy, keeping corporation elections in mind… We don”t want to do politics at this point in time as there is lockdown. If things continue to be the same after the lockdown ends, we will protest on the streets,” he said. PTI

1st batch of Kannadigas may land on May 11

After Ramanagara case, Chamrajanagar is only virus-free district in state