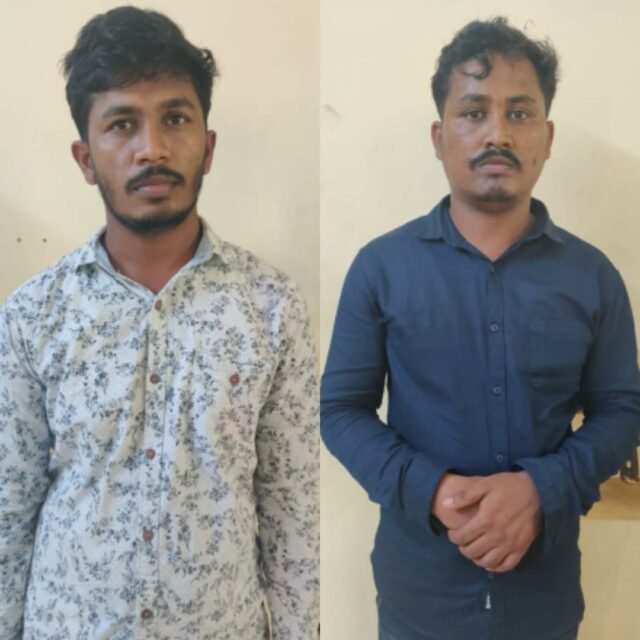 In KR Puram, duo refuse to pay, assault BBMP marshals and are arrested

If an incident that took place on Friday is any indication, BBMP has its task cut out in trying to collect a fine of Rs 1,000 from any citizen not covering his/her face in a public place.

The civic authority claims it collected more than a lakh on the first day the penalty came into force. But it is obviously not going to be a cakewalk for BBMP marshals. The first ‘revolt’ of its kind was reported in KR Puram, which is represented by Urban Development Minister Byrathi Basavaraj.

The KR Puram police arrested two persons for assaulting BBMP marshals who were discharging their mandated duty by fining the duo Rs 1,000 each for not wearing a mask or any other cloth covering.  The duo have been identified as Arun s/o Thippanna (26) and Jagadish s/o G prakash (28) — both residents of Koladevi village, Agaram panchayat, Duggasandra hobli in Mulbagal.

BBMP Marshals & Health officials enforcing Govt advisory on masks were abused & assaulted in KR Puram today. With the help of police, assault cases have been registered against Arun & Jagadish. Request citizens to follow rules 😷 & ↔, else strong action will be taken as per law. pic.twitter.com/GJos3zrTWC

It all started after BBMP marshals noticed two persons on a bike who had not covered their faces with a mask, and flagged them down. According to an eyewitness, the duo refused to pay the penalty and instead assaulted the marshals, who reportedly retaliated in kind.

It may be recalled that the then BBMP commissioner BH Anil Kumar on April 30 had issued an order fixing Rs 1,000 as a penal amount for residents of Bengaluru not covering their face.

When all the leading media outlets in Bengaluru kept quiet about the quantum of the fine – Rs  1000 seemed particularly high during the lockdown period — TheBengaluruLive single-handedly took up the issue and wrote a series of 3 reports, resulting in the Karnataka government lowering the fine to Rs 200.

Now, once again, the government has seen fit to re-impose a penalty of Rs 1,000 on rule violators in public.  From October 1, Karnataka entered the Unlock5 phase and since Friday, BBMP has started imposing the penalty of Rs 1,000 on persons not maintaining social distancing and not covering their faces in a public place.

The KR Puram ‘revolt’ can therefore be seen as the first manifestation of a  ‘challenge’ to the authorities by members of the public who are tired of the long-drawn lockdown restrictions.  “It is not easy even to fine Rs 200  with people arguing so much. In such a situation, collecting Rs 1000 is going to be a huge challenge,” said an officer who wished not to be quoted.

“These are spot fines levied on the street. People may not carry that much in their wallets or want to use their debit/credit cards. Hence, the government needs to rethink the decision to penalize taxpayers such a large amount, or else the KR Puram incident will replicate itself every day in Bengaluru,” said another officer.

Another officer opined that the government was in effect penalizing unemployed persons who are on the streets in search of a livelihood and cannot afford to pay such a huge fine.  “As we are in the unlock period, the government has to rethink its strategy to ensure that every citizen in a public place covers his/her face by educating them and setting a reasonable deadline, after which the penalty can  be imposed,” he said.