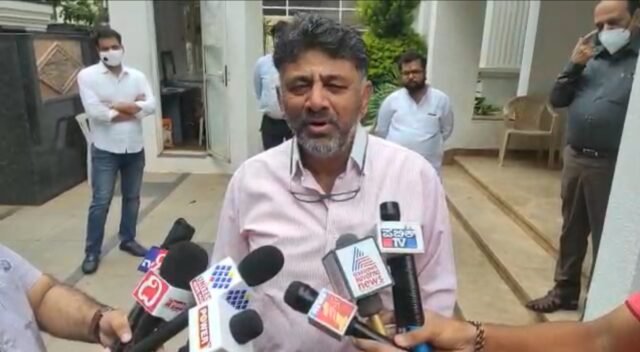 Karnataka Congress chief DK Shivakumar, who was criticised for slapping a party worker for putting his hand on his shoulder, said the person is his relative and there is no need to make it a big issue.

Shivakumar went to KM Doddi in Mandya district of Karnataka to visit an ailing veteran politician G Madegowda along with some of his party workers.

Speaking to media on Sunday, the party chief said, “He is my relative, a family member. He wanted to keep his hand on my shoulder. He is our relative that is why I slapped and told him to remove his hand. It happens in relationships. You people are giving more importance to it. Yes, I agree I slapped him a bit hard. No need to make it big. You people are making him a big leader by showing him more.”

Bharatiya Janata Party (BJP) National General Secretary CT Ravi on Saturday tweeted a video of the incident and referred to Shivakumar as a disciple of Kotwal Ramachandra, who is popular as a don in Bengaluru.

“Karnataka Congress President DK Shivakumar slaps his party worker in full public view. If this is how the “former shishya” of Kotwal Ramachandra treats his party worker, one can imagine what he would do with others. Have you given DKS the “licence for violence”, Rahul Gandhi?” he questioned. (ANI)

DKS, other Congress leaders have close shave as chopper forcelands