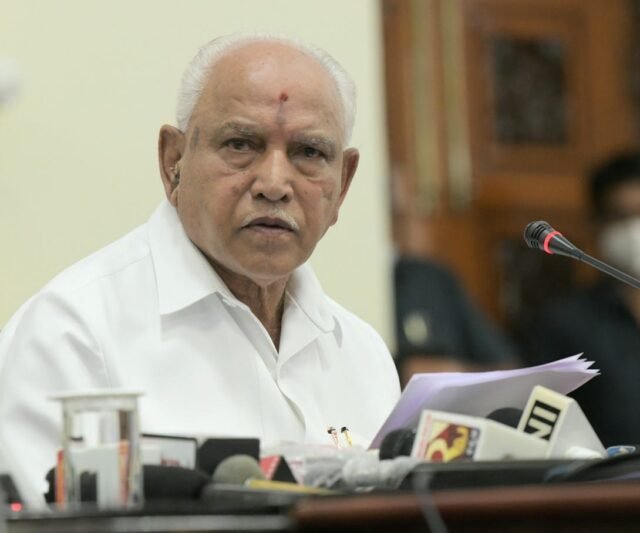 Karnataka Chief Minister B S Yediyurappa on Monday asked ruling BJP legislators not to indulge in signature campaign or issue political statements on speculation about his replacement, and instead focus on COVID management in their constituencies and help the needy.

“At a time when people are facing distress because of the COVID pandemic, every BJP legislator should give priority towards controlling COVID in their constituencies.I appeal that no one should indulge in any kind of signature campaigns or making political statements, and help people in distress,” Yediyurappa said.

The Chief Minister’s statement was following a series of political statements on speculation about attempts to replace him, and claims by his political secretary M P Renukacharya about having a letter signed by more than 65 legislators in his favour.

Meanwhile, Revenue Minister R Ashoka said, state BJP president Nalin Kumar Kateel has constituted a committee to put an end to open expression about resentments and statements on leadership change, which are causing embarrassment to the party and the government.

He also said that the party president has issued an order not to carry out any kind of signature campaign, and warned action against those involved.

Stating that the committee consists of state president, Chief Minister, four general secretaries, four Ministers, Ashoka, who is also part of the committee said, “it is with a purpose to clear confusion and stop open statements.Those with grievances can approach it.”

“No one should speak regarding the Chief Minister’s position or about replacing him…here no one should make counter statements either in favour or against the CM.This is the direction from the state president and the central leadership,” he added.

Amid speculation about a leadership change, Yediyurappa on Sunday said that he will continue in the top post as long as the BJP high command has confidence in him, and he had no confusion about it.

Several legislators and Ministers considered close to Yediyurappa rallying around him have said the Chief Minister’s statement was out of “hurt” due to recent developments and open statements by some leaders on leadership change, amid efforts by his administration to control COVID-19.

Earlier today, MLA Renukacharya said he has a letter signed by more than 65 legislators in favour of Yediyurappa and owing their allegiance to him, and wants him to continue as the Chief Minister.

“I have the letter containing signatures of MLAs in favour of Yediyurappa, there is nothing to hide in this, it is honestly (done).The letter addressed to state president is drafted in Kannada have been signed (by MLAs) and to national leaders including PM, Amit Shah (Home Minister) and J P Nadda (national president). It is drafted in English and signed,” he said.

However, Hubballi-Dharwad West BJP MLA Arvind Bellad, whose recent visit to Delhi had led to speculation about attempts to unseat Yediyurappa, expressed doubts about the authenticity of the letter containing signatures of MLAs and said no signature campaign has taken place in favour or against anyone.

“Signatures were earlier taken from about 65 legislators during the session, seeking early release of funds from the RDPR department.As such letters have a separate covering letter and papers containing signatures, I don’t know whether that letter is being used now,” he said, adding that the truth will be known if the legislature party meeting is called.

Renukacharya, however, clarified that the letter concerning the RDPR department has already been given to those it was addressed to, and this was a separate letter.

Hitting back at Bellad by sarcastically calling him “Chief Ministerial aspirant”, he also said that the letter was not a show of strength against anyone.

Meanwhile, several Ministers including Industries Minister and senior BJP leader Jagadish Shettar, ruling out leadership change, said such talks were adversely impacting the image of the government and administration.

“I don’t understand why this issue of leadership change is being discussed repeatedly.If such discussions continue, it will damage the government”s image and will impact the day-to-day functioning of the government and administration,” Shettar said.