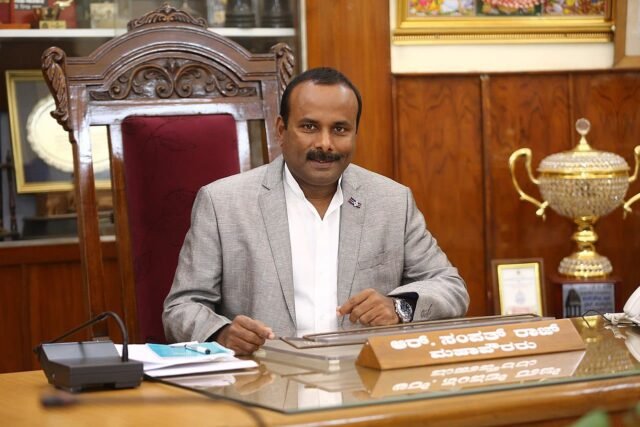 Sampath Raj likely to be presented in court today

Central Crime Branch sleuths on Monday night nabbed Congress ex-mayor R Sampath Raj, one of the prime accused in the DJ Halli riots in August. Sampath Raj is accused of having instigated a mob to vandalise and torch fellow Congressman and MLA Akhand Shrinivas Murthy’s house.

Ever since he was chargesheeted in the riots case, the former BBMP mayor had been evasive. He had even given cops the slip after being discharged from a city hospital where he was treated for Covid-19. The CCB sleuths had been searching for him for the last few days, and finally managed to arrest him in Bengaluru itself.

The police had issued a look-out notice for Sampath Raj and his associate, former corporator Zakir.

Earlier, on November 7, the sleuths had arrested a person named Riyazuddin on a charge of harbouring Sampath Raj and Zakir.

As per sources, Riyazuddin had revealed several hideouts of Sampath Raj. Riyazuddin is said to be a BBMP-empanelled contractor who had executed several civil works in Sampath’s ward.

“Riyazuddin was arrested on the charge of helping and harbouring the accused in his car. He took them to a farmhouse near Nagarhole and gave them shelter for a few days. He was sent to judicial custody,” said Sandeep Patil, Joint Commissioner, CCB.

The CCB is conducting investigations in only one case in which MLA Akhand Srinivas Murthy’s house was set ablaze. The police allege that Sampath Raj played a key role in the entire riots.

Sampath Raj had filed an anticipatory bail application before the High Court. His plea was rejected, and the HC had directed the police to locate his hideouts and arrest him at the earliest.

Do you want HC to hold village polls, asks CJ