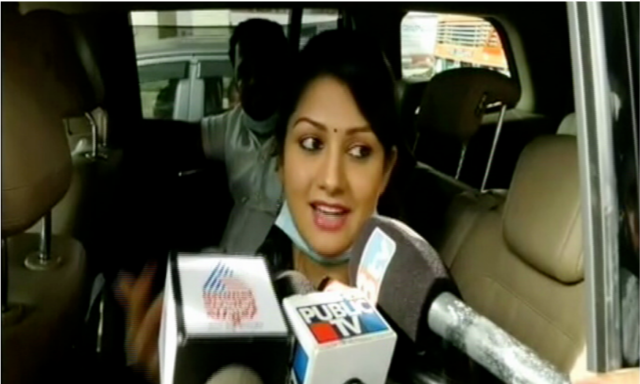 Kannada film actress Radhika Kumaraswamy was on Friday grilled by Central Crime Branch sleuths over her alleged links and financial transaction with a man arrested recently on charges of duping a realtor.

The actress who appeared at 11 AM was questioned for about four hours, the CCB sources said.

In the meantime, Yuvaraj, who had duped the realtor and had allegedly transferred the money into Radhika”s account was also brought to the CCB office.

Before entering the CCB office, Yuvaraj said on Friday he knew Radhika’s family for almost 18 years.

After coming out, Radhika said she answered all the questions posed by the police and she was ready to come once again if summoned.

“There is no problem at all. If they (police) call me again, I will come back,” she told reporters after coming out.

To a question, the actress said she cannot divulge everything that was asked to her during the interrogation.

Responding to a few media houses, she said she had never received Rs 1.25 crore as has been reported by a few television channels.

She also clarified that she did not abscond as was shown in some news channels.

Later, the CCB issued a statement, “Detailed inquiry was done by the investigating officer Assistant Commissioner of Police Nagaraj. Further investigation will be based on her statement.”

Radhika had told reporters on Wednesday that she had received Rs 15 lakh from Yuvaraj, who identified himself with a right wing party.

The actress said she received the money from Yuvaraj to make a period film.

She, however, expressed ignorance about the remaining Rs 60 lakh deposited in her account.

The CCB had arrested Yuvaraj in December following a complaint by a realtor who alleged that he was duped to the tune of Rs 10 crore with the promise of an election ticket.

The raid on his residence led to the recovery of a cash of Rs 26 lakh and cheques for Rs 91 crore. PTI