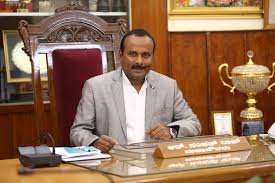 In a sign of the law unrelenting in apprehending former Congress mayor R Sampath Raj, Central Crime Branch sleuths have pasted a notice on his house asking him to appear before the investigating agency.

Sampath Raj is accused of instigating a mob to set fire to MLA Akhand Srinivas Murthy’s house during the DJ Halli and KG Halli riots in August.

CCB ACP Venugopal, who is investigating the case, visited Sampath Raj’s house in Fraser Town and pasted the notice.