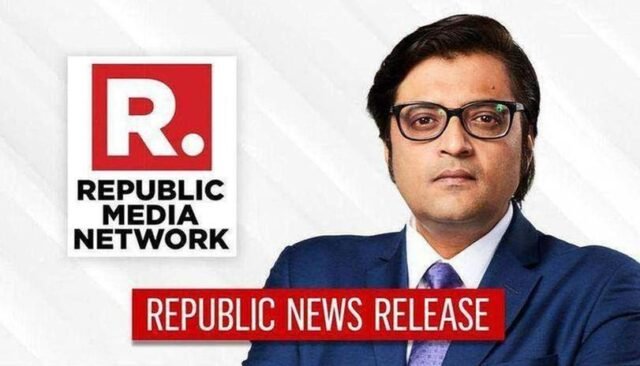 In a black day of India’s democracy, the Editor-in-Chief of the number 1 news network of India, Arnab Goswami, was dragged by his hair and arrested

This morning the entire country witnessed the operation of a police state in Maharashtra. At 7:45 am, Republic Media Network’s Editor-in-Chief Arnab Goswami house was encircled, his home was barged into, cameras forcefully turned off, he was physically assaulted and dragged out of his home in a police van.

In a black day of India’s democracy, the Editor-in-Chief of the number 1 news network of India was dragged by his hair and arrested. Mumbai Police Commissioner Param Bir Singh’s cops shut off cameras, and thrashed Arnab. They stopped Arnab from handing medicines to his parents-in-law, and even physically assaulted his son. They refused permission for a written legal note be put on record. They paraded India’s leading Editor-in-Chief, without a shred of evidence, as though he was a criminal. Arnab was not served summons prior and not even allowed access to his legal team.

Amidst open criminal intimidation and assault, encounter cop Sachin Vaze told Arnab, “You don’t know what I am capable of.” The Mumbai Police in brazen disregard for all due process, integrity and any semblance of fair investigation, dragged Arnab Goswami by the collar to a crime branch unit police and physically attacked him inside his him. This, in spite of him repeatedly reiterating that he will cooperate.

As Arnab was being manhandled and pushed into a police van, by a battalion of armed police officers, he said, “They hit me. They physically assaulted me. I want to tell the people of India to fight for us.” He said, “my son was beaten-up.”

#IndiaWithArnab | 'They beat my son,' Arnab Goswami manages to say through the van's window after SHOCKING assault by Mumbai Police at his house; Fire in your support for #ArnabGoswami; Send in your videos; Join us now, #LIVE here – https://t.co/jghcajZuXf pic.twitter.com/JAyCe2iHh5

It is terrifying that the Mumbai Police and the state of Maharashtra are unapologetic and unhinged in misusing their office and uniform to undertake a physical attack, and open criminal intimidation even before the cameras against a citizen of India. Moreover the attack on the Fourth Estate without evidence or verifiable facts, on the basis of a closed case being reopened with the sole aim to make an unwarranted arrest of Arnab Goswami is shocking and one that all of India stands against.

With regard to his legal team, Arnab Goswami was blocked by the Mumbai Police vis-a-vis having legal aid present. Encounter cop and Param Bir Singh’s right hand man Sachin Vaze declared to Republic TV – Arnab Goswami has been arrested under the grave section of 306 of the IPC, in a mocked-up case. It may be recalled that fake charges of suicide were levelled against Arnab Goswami in 2018. The matter was investigated by the Mumbai Police and closed by a court of law after a closure report by the police noted that no case was made out.

Republic Media Network stands strongly against the Maharashtra Government and the Mumbai Police’s transparent abuse of power, the butchery of the rule of law, murderous assault on the free press of a democratic India.

The Mumbai Police’s nefarious design stands exposed before the world — as they have gone from alleging a fake TRP scam to seeking editorial access to the Republic newsroom, from planting fake stories on Republic advertising deals to booking entire editorial staff under a draconian colonial act, from alleging a fake Hawala case to criminalising public hashtags — and the latest forceful arrest of Arnab Goswami shockingly comes in a case that was closed by a court of law.

If a precedent is made to wantonly arrest an independent journalist who seeks accountability and answerability from the system, demands justice for the Palghar sadhus, pursues justice for Sushant, investigates the IndiaBulls case and refuses to toe the script of the Maharashtra Government – it is the strongest hammerblow to the Constitution of India and the foundation of the nation’s democratic ethos.

We appeal to the right-thinking citizens of India, to the Honourable Courts and the highest offices of this great country to come together, to stand against the onset of an emergency in Maharashtra under CM Uddhav Thackeray and at the hands of Mumbai Police Commissioner Param Bir Singh. We urge the people of India to join this campaign. Republic Media Network will fight till the very end and we have no doubt that the truth will win. The truth cannot be assaulted. The truth cannot be arrested. The truth cannot be defeated.

Note: story was first published on https://www.republicworld.com/india-news/law-and-order/arnab-goswami-assaulted-and-arrested-by-police-republic-asks-indians-to-defend-democracy.html at 09:45am

Apply Before March 10 To Get Kempegowda Award