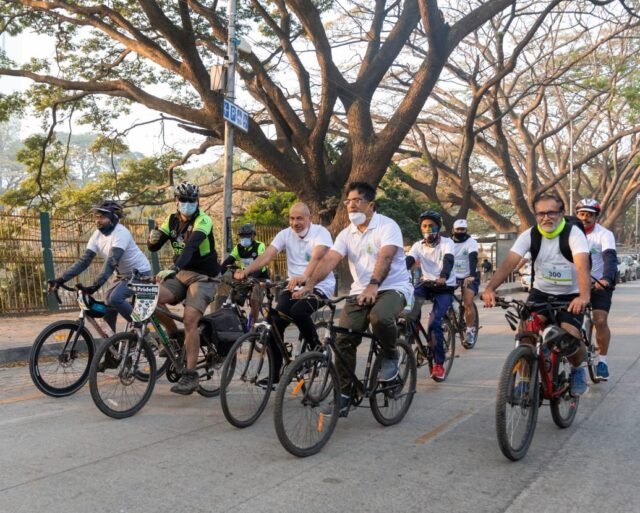 Event organised by GAIL to create awareness on fuel conservation

The Saksham Cyclothon started from Sree Kanteerava Stadium and more than 500 cyclists pedalled their way around Cubbon Park for over 5 km before finishing again at the stadium. Before flagging off the cyclists, the chief guest administered a pledge in Kannada and English to all the participants for practising measures for ensuring optimal utilization of fossil fuels and taking steps for its conservation for future generations.

The cyclothon was organised by GAIL as part of an awareness campaign, ‘Saksham 2021’, an initiative of the Petroleum Conservation Research Association (PCRA) under the aegis of the Union Ministry of Petroleum and Natural Gas. The objective of the cyclothon is to create awareness amongst people about fuel conservation and environment protection, as well as to promote the use of bicycles for short distances, which will not only save fuel but also help in creating a cleaner, greener and healthier environment.

Speaking on the occasion, Chief Secretary P Ravi Kumar emphasised that even small initiatives by individuals to substitute and reduce the usage of petroleum products, like walking or cycling, using public transport, car-pooling and mindful usage of energy-efficient equipment and machinery, can contribute in a big way towards oil & gas conservation. Ravi Kumar added that such measures will also decongest city roads and will provide supplementary health benefits to individuals.

GAIL Executive Director (Southern Region) P Murugesan appealed to the people of the state to use the green and economical fuel — Natural Gas — for households, vehicles, and commercial and industrial establishments for the betterment of the environment.