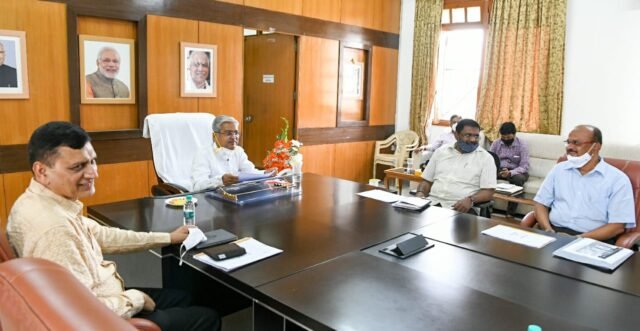 A 25-storey twin tower near Ananda Rao Circle has been proposed to bring together all government offices, presently located in rented buildings across the city, under one roof, according to Deputy Chief Minister Govind M Karjol.

On Thursday, Karjol presided over a meeting on the proposal with senior officials of the Department of Public Works at the Vidhan Sabha. The National Building Construction Corporation (NBCC) has prepared the blueprint and will also prepare the DPR . The current proposal is for a Floor Area Ratio (FAR) of 2.5.

Since the metro construction in the area is utilising FAR of 4, the proposed Twin Tower needs to be built on the same model, Karjol said. He suggested redesigning the proposal with a FAR of 4.

Cabinet approval must be taken within the next 15 days to prepare the DPR, he said.

With all government offices coming under one roof, the public will be able  to easily access various services, he added.

‘Good’ if Congress is dissolved: DCM

Home Minister lucky to be drenched, not drowned!