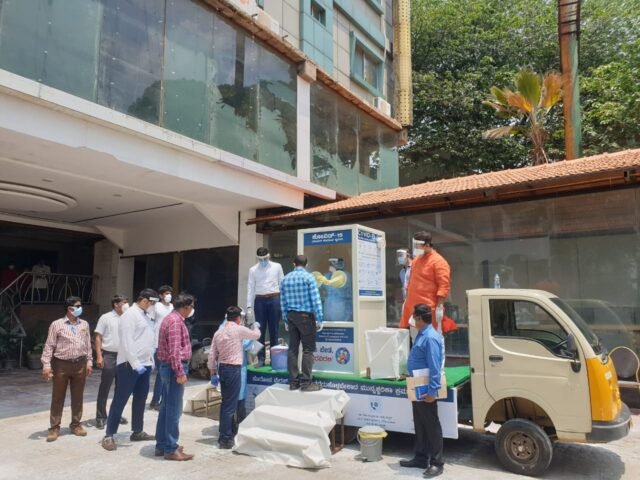 Of Saturday’s infections, 187 are returnees from Maharashtra

There seems to be no respite for Karnataka from the phenomenon of single-day spikes in Covid-19 cases. Saturday saw yet another single-day record of 200-plus new cases, taking the state’s tally to 1,959.  Meanwhile, one death on Saturday took the state’s fatalities to 42.

Of the 216 new infections, 187 are returnees from neighbouring Maharashtra, underlining Karnataka’s fears about its high-risk neighbours.

The previous biggest single-day spike was 149 cases on Tuesday, when the state breached the ‘century’ mark in daily terms for the first time.

As of May 23 evening, a total of 1,959 Covid-19 cases have been confirmed in the state, which includes 42 deaths and 608 discharges, according to the health department bulletin. Of 1,307 active cases, 1,294 are in isolation at designated hospitals and are stable, while 13 are in ICUs. Meanwhile, 11 patients who recovered were discharged on Saturday.

Saturday’s fatality was a 32-year-old man from Bengaluru Urban who was admitted to a designated hospital on May 19 with complaints of breathlessness. He had comorbid conditions, the bulletin said, adding that he died after a cardiac arrest.

While 187 out of the 216 newly reported cases are returnees from Maharashtra, returnees from other states who tested positive include two each from Gujarat, Delhi and Tamil Nadu, and one each from Andhra Pradesh and Rajasthan.

The remaining cases include 15 who are contacts of patients who have already tested positive, three with a history of Influenza Like Illness (ILI) and one with a history of SARI. Two patients’ contacts history is still being traced, the bulletin said.

Among the districts where the new cases were reported, Yadgir accounted for 72, followed by Raichur with 40, Mandya with 28, Chikkaballapur with 26, Gadag with 15 and Dharwad with 5. Also, there were four cases each from Bengaluru Urban and Hassan, three each from Kolar, Ballari, Udupi, Bidar, Davanagere and Dakshina Kannada, two from Uttara Kannada and one each from Kalaburagi and Belagavi.

Bengaluru Urban district continues to tops the list of positive cases with 265 infections, followed by Mandya  with 237 and Kalaburagi with 135.

Among discharges too, Bengaluru Urban tops the list with 130, followed by Mysuru with 88 and Belagavi with 65.