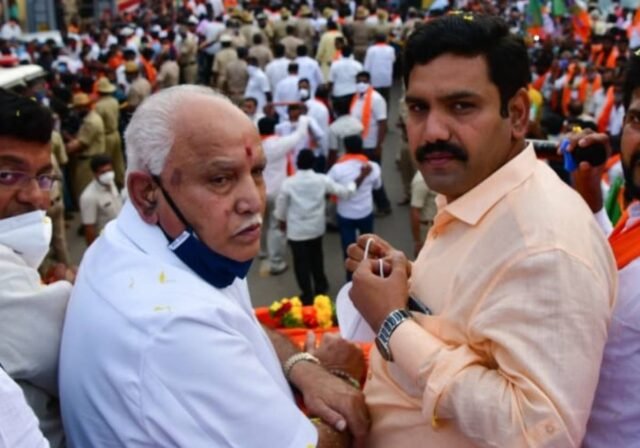 Former Karnataka chief minister B S Yediyurappa on Saturday said his son and BJP state vice-president B Y Vijayendra has the strength and capacity to win an election from anywhere but the final call has to be taken by the party high command.

Yediyurappa, who is an eight-time MLA from Shikaripura assembly constituency in Shivamogga, said he will not contest the next assembly election but would ‘suggest’ the party high command to field his son.

During a programme in Shivamogga on Friday, the Lingayat strongman said he would not contest the next election but would field his son.

The BJP stalwart reiterated what he said the previous day.

"I appeal to the people of Shikharipura to elect him with a margin bigger than mine. Since I am vacating the seat, @BYVijayendra will contest from Shikharipura despite there being demand for him to contest from old Mysuru region," @BSYBJP tells reporters. pic.twitter.com/P3BphnOh5q

”Vijayendra is ready to contest whichever place the party high command asks him to contest. By the grace of God, he has the strength to win from every place and has built his personality accordingly. However, the final decision will be of the Prime Minister. I can only give a suggestion. We will stick to his (PM’s) decision,” Yediyurappa told reporters on Saturday.

According to him, during a programme the party workers had put pressure on him to contest from Shikaripura again but he declined and proposed his son’s name as the contestant from the BJP in his constituency for next year’s polls.

”I told my party workers that I will not fight the next election but I will ask Vijayendra to contest the poll,” the veteran BJP leader said.

The former chief minister said there was pressure put on him on a daily basis to field Vijayendra from Mysuru or Chamarajanagar district.

BJP insiders said Vijayendra had played a crucial role during the KR Pet assembly bypoll and helped the party win from the seat for the first time in the Vokkaliga bastion.

Yediyurappa hails from Bookanakere in KR Pet constituency in Mandya district but the party could never win the election from there.

In July 2019, K C Narayana Gowda, who is now a minister in the Basavaraj Bommai government defected from Janata Dal (Secular), resigned from the assembly, contested the by-election on the BJP ticket from KR Pet and won the seat.

Vijayendra had also desired to contest from Varuna constituency in Mysuru in 2018 on the BJP ticket when Congress stalwart Siddaramaiah vacated his seat for his son S Yathindra to contest as a Congress candidate. However, the BJP leadership did not entertain his wish.

The other son of Yediyurappa, B Y Raghavendra is an MP from Shimoga Lok Sabha constituency. PTI