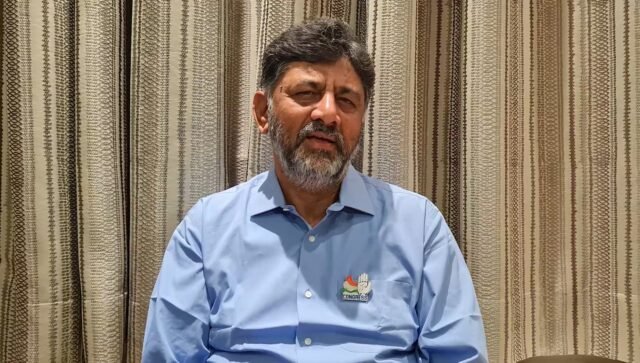 After former Karnataka chief minister BS Yediyurappa announced his decision to vacate the Shikaripura assembly seat for son BY Vijayendra, Congress chief DK Shivakumar said that the veteran leader still has political clout and the BJP can win more seats under his leadership. “BJP leader BS Yediyurappa should not announce his retirement as he still has the political strength,” he said while addressing media persons here on Friday.

“The BJP has won more seats under his leadership but not with the name of another person,” he added. Shivakumar’s remarks came a day after the former CM, during a public address at Anjanapura in Shikaripur Taluk on Friday, stated that he won’t contest the next elections in Karnataka and appealed for their support to his son.

“I am giving up my Assembly constituency for my son BY Vijayendra. I request the voters of Shikaripura to make sure that he wins with a huge margin. I will not contest the next election,” Yediyurappa said. Responding to a question about Yediyurappa’s retirement, the Congress leader said, “Operation Kamala (Lotus) was launched in Yediyurappa’s name and BJP came to power, while he went to the Raj Bhavan with tears in his eyes and thus resigned.”

Alleging that the BJP has always “used him”, Shivakumar further said, “No matter how hurt he is, he has always backed the party. He believed in the party’s ideology and worked. He knows the pain and persecution he’s been through mentally and was suppressed. However, the BJP has used him as much as they wanted.” Yediyurappa’s announcement came after he denied the claims that he had been sidelined in the party (BJP), which is in power in the southern state.

Meanwhile, in his public address on Friday, Yediyurappa also referred to the infighting in Congress between Siddaramaiah and DK Shivakumar for the Chief Minister’s post and said that the Congress leaders had become impatient and were talking about becoming the CM much before the elections. “There is infighting going on in Congress and leaders are fighting to become CM and it’s all in the open. BJP is going to come to power in Karnataka again,” he said.

Listing out the achievements and efforts made by his son Vijayendra in the victory of party candidate Narayana Gowda in the K.R. Pet Assembly segment in Mandya district, he said, “BJP candidate, current Minister for Sports and Youth Services Narayana Gowda’s victory was ensured by Vijayendra. Vijayendra had put in efforts and now, the candidate Narayana Gowda has created a favourable atmosphere to ensure a win in three and four Assembly segments of the districts.” He also said that his son was capable of handling the “wins” of some MLAs in Karnataka. (ANI)

Duo kill friend for drinking more than he paid for

No sale of liquor during weekend curfew: Karnataka Excise Minister