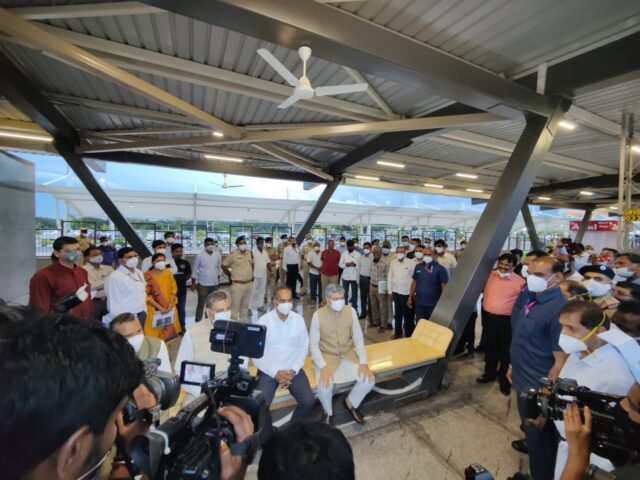 The facilities and amenities provided at the state-of-the-art M Visvesvaraya Terminal in Bengaluru will become a benchmark for the stations, which will be built in future all over the country, Minister of Railways, Communications, Electronics and IT Ashwini Vaishnaw said on Sunday.

“Vaishnav appreciated the team of engineers who conceived and executed this project. He stated that the facilities, amenities provided for enhancing the comfort and convenience of passengers at Sir MV Terminal, will become a benchmark for the stations which will be built in the future all over the country,” an official statement said.

The terminal, according to Railway officials, is the first centralised air-conditioned Railway station at Byappanahalli. It is on par with the airport terminals, they said.

The officials said the station, which is equipped with seven platforms, is designed to serve a footfall of one lakh passengers per day and has features like Braille signage, ramps to access subway apart from escalators and lifts.

Hon'ble Minister of Railways Shri @ashwinivaishnav inspected Sir M Visveswaraya Terminal, Bengaluru. He praised the team involved in constructing this terminal, and said that it will become a benchmark for new stations in future days. (1/4)@RailMinIndia @GMSWR@drmsbc pic.twitter.com/3ciPlVJCD5

Shri @ashvinivaishnaw reviewed the amenities, potential for parcel traffic from this terminal in addition to the increased coaching train services. (2/4)@RailMinIndia @GMSWR@drmsbc pic.twitter.com/yl2d5UAYxz

He inspected the main station building, operational aspects of the yard and service buildings. He appreciated innovative suggestions put forth by a young officer of Bengaluru Division. (3/4)@AshwiniVaishnaw @RailMinIndia @GMSWR @drmsbc pic.twitter.com/E6sDX0xouO

"This (Sir M. Visvesaraya Railway Terminal) is modelled on a totally new concept: it will show the way for future development of stations in the entire country": @AshwiniVaishnaw pic.twitter.com/sf6RgArcJ6

Vaishnaw also reviewed the operational aspects of the railway yard, amenities and innovative features provided at the station.

He discussed with senior officers of South-Western Railways the potential for transportation of parcel from this terminal.

He instructed officials to formulate proposals to generate revenue from running of parcel special trains to transport white goods, industrial tools, textiles and other products manufactured in this area. PTI