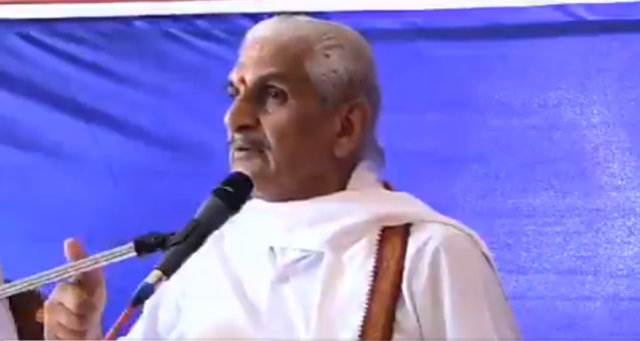 The horrific and fatal attacks on innocents by Islamic fanatics in France have stirred strong responses across the globe, not least when it comes to the small town of Ullal near Mangalore city in Karnataka.

The Muslim-dominated town is now in the crosshairs of controversial RSS leader Kalladka Prabhakar Bhat, who has likened the town to a miniature version of Pakistan.

Speaking at a programme in Kinya village on Monday, Bhat pinned the blame for the demographic situation on the falling population of Hindus and the growing numbers of the minority community. “Hindus must awaken to ensure that there is someone to protect the temples,” he said.

Harking back to the Partition, the RSS strongman of the region said, “Pakistan and Bangladesh came into being as the Muslim population began to rise. Similarly, Ullal and other such places have become like Pakistan.”
‘Who will protect temples?’

“When there is only one child in the house, without any sister or brother, the child becomes selfish. When there are more children in the family, there is more happiness and joy. I feel that population of Hindus is low in places like Kinya and Ullal. In such a scenario, who will be there to protect our temples, practices and culture?” he said.

Bhat rhetorically asked, “How did Pakistan come into being?” He provided his own answer, saying, “It is because their (Muslims’) population increased. That is why Pakistan and Bangladesh came into being. Now, if you go to Ullal, has it not become like Pakistan? Can it be anything else? Pakistan has been formed in Ullal and other places.”

The RSS leader’s solution to what he sees as a demographic time bomb was put matter-of-factly. “There is a social responsibility on every married (Hindu) person (to have more children).”

However, Kalladka Bhat’s remarks are certain to create a political storm in the coastal region, and even nationally, and are just as certain to be challenged. His ‘observation’ and ‘solution’ have already been aired on national news channels, and it is very likely that opposition parties – both in Karnataka and at the national level – will demand that the RSS rein him in or will even file a complaint against him for ‘creating communal discord’.