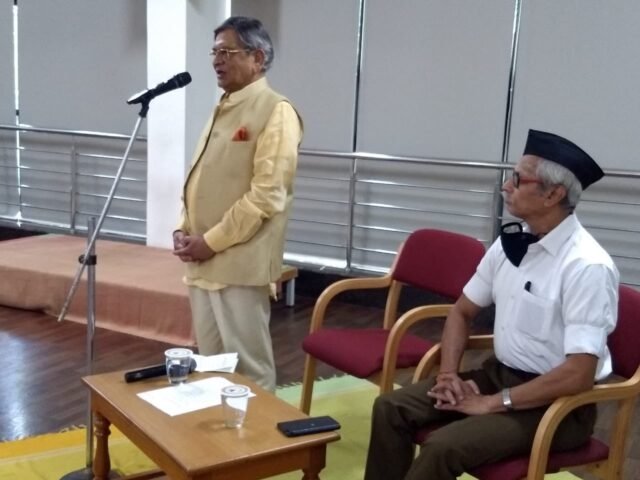 Former Minister for External Affairs and senior BJP leader S M Krishna on Monday said that the RSS founders were responsible for the idea of ‘Vasudeva Kutumbakam’ in the country.

Speaking at a function organised by RSS here on Monday, he said that “this idea reflects the basis of the historical, cultural and moral ethos of our country,”

He said that the role of the Rashtriya Swayamsevak Sangh (RSS) in the country is significant today more than ever before.
The 88-year-old leader who joined the BJP in 2017 after cutting ties with the Congress of which he was a member for several decades, said “I have served as a politician in several capacities and donned many a role and today I feel that the role of RSS is significant more than ever before.”

During the event, Krishna was presented with the signature RSS cap. The RSS is the ideological parent of the BJP.
Stressing the importance of nationalism and patriotism, Krishna drew a parallel with countries like the USA that mandate every citizen to draft into the military or national service for at least two years.

” This has also become a point of contention in the current US elections, with many criticising Donald Trump for failing to draft himself. People are alleging that he excused himself out by giving dubious reasons. India too, needs to place a similar mandate on its citizens. We have not done it thus far but it’s never late,” he added.

Democracy in India also reflects the spirit of Hindu religion, he said.

“Unlike the case of Trump who has not committed to peaceful transfer of power, leaders like Atal Bihari Vajapayee were willing to let go of power and happily worked in the opposition. This is the culture of detachment that Hindu religion represents,” Krishna said.

There were scores of RSS workers who had dedicated their entire life to the service of the nation, according to Krishna who believed that patriotism was a ‘vaccine’ that needed to be administered to children at a young age.

He opined that India’s education system was unfortunately based on western ideas and needed a shift in focus. RSS had a role to play towards this end, he added. (Agency)