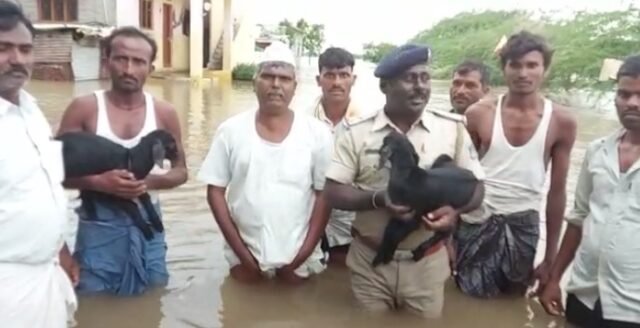 A police sub-inspector attached to Nelogi Police Station in Jewargi taluk of Kalaburagi, who was accused of posting photos and videos of a fake rescue operation conducted by him along with the help of villagers, was suspended on Friday.

Kalaburgi Superintendent of Police Semi Miriam George said that action was taken against police sub-inspector Mallannagouda Yalagod based on a preliminary inquiry report submitted to the department.

The police Sub-Inspector Mallannagouda Yalagod had attached a fake video and photos of helping villagers during the recent flood situation on the banks of river Bhima.

Mr Yalagod can be seen posing in a photo standing in floodwaters with two goats in his hand. The officer has made a series of such videos displaying filmy style behaviour.

Earlier, Mr Yalagod had come under the scanner of senior officers in the department when he celebrated his birthday on a grand scale during the lockdown in which his followers bathed him in milk.