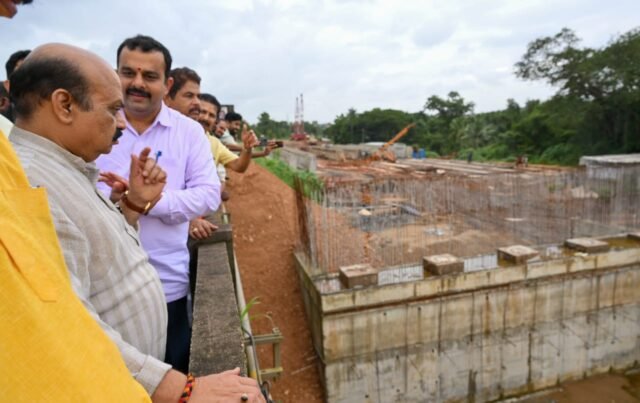 The Karnataka government is with the people at this hour of crisis when many parts of the state are reeling under floods, Chief Minister Basavaraj Bommai said on Tuesday.

District in-charge ministers have involved themselves in relief works taking everyone into confidence, said Bommai, who has embarked on a tour of the rain-affected districts.

Revenue Minister R Ashoka has just returned from his visit to Kodagu. The entire government is engaged in it, the Chief Minister said.

”I am also visiting the affected areas today and will issue necessary instructions for rescue and relief works,” Bommai said.

Efforts are on to convince the people residing in seismic sensitive zones and in areas which are prone to landslides to shift to safer places, he said.

Road connectivity is snapped in many places due to incessant rains. Landslides and mild tremors have occurred in a few places in Kodagu, sea erosion has affected the people in coastal region, and houses along the river banks have been damaged in many parts of northern Karnataka, Bommai said.

In some places crops have been damaged due to high discharge from the reservoirs. Survey has been conducted on the damages. Exact details would be shared soon.

Replying to a query on funds for relief works, Bommai said Rs 730 crore is available with the NDRF (National Disaster Response Fund). There is no shortage of funds for undertaking relief and rescue works. Central assistance would be sought, if needed, after estimating the losses.

Reacting to recurring floods in many villages, Bommai said people in 63 flood-prone villages along river banks have been relocated. But, people are reluctant to relocate in some villages. Expert opinion has been sought on safe relocation of such villages. Special project would be formulated in this regard.

Replying to a question, the CM said it has been decided at the core committee meeting to replace heads of various state-run Boards and Corporations who are serving in their posts for over one and a half years to give an opportunity for others.

The Chief Minister also visited Kodagu and Dakshina Kannada district and took stock of the situation.

In Kodagu, Bommai visited those places where the incidents of landslide were reported, sources close to the Chief Minister said.

The Chief Minister later went to the relief camp and met the families shifted by the district administration in view of heavy rains and landslide.

He also heard their grievances of families camping there and assured them cooperation.

Later, he held a meeting with the officials where he asked the status of the building construction for those people who lost their houses two years ago in the massive flood and landslide.

He instructed the officials to complete and hand over the remaining houses in the next one and a half months.

”About 835 houses have already been built for those affected by floods in 2018-19. Officials have been instructed to restore the power lines and transformers without any delay in the district,” Bommai said.

Based on their report appropriate permanent rehabilitation works would be taken up. In some places houses would be retrofitted to offer better protection, he said.

”A team from Amrita University has conducted a study in the region and submitted a preliminary report. The recommendations would be incorporated to minimize the damages by next monsoon season,” Bommai explained. PTI

Flipkart raises US $3.6 bn in funding to accelerate the growth of the consumer...