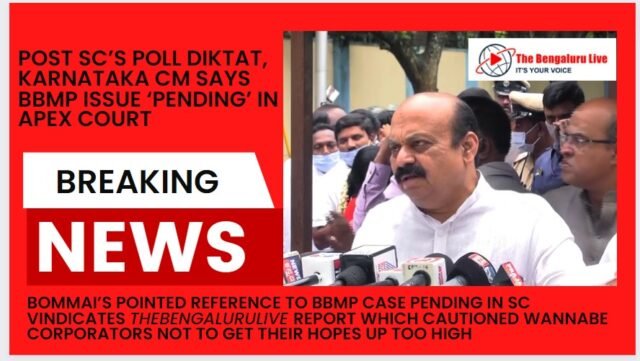 By referring to the ‘pending’ BBMP elections, Chief Minister Basavaraj Bommai has indirectly acknowledged the accuracy of the report by TheBengaluruLive in which we had cautioned BBMP aspirant corporators not to raise their hopes too high, too soon following the recent Supreme Court order calling for early local body polls across the country.

Read Here: BBMP aspirants should not ‘bank too much’ on SC call for local polls

On Friday, the CM, replying to media queries on the OBC reservation, said, “One case regarding BBMP elections is pending before the Supreme Court,” and added, “Secondly, regarding the Zilla and Taluk Panchayat polls too, we have to request (the SC) that we (the Karnataka government) have to provide OBC reservation legally and constitutionally.”

The Supreme Court had on May 10 directed the Madhya Pradesh State Election Commission to announce a schedule for local body polls in two weeks.

The apex court had said work on delimitation or formation of wards was not a legitimate ground for any authority to not discharge its Constitutional obligation in notifying an election schedule so as to ensure that a new elected body is installed before the expiry of the outgoing body’s five-year term.

Significantly, the 3-judge bench of Justice AM Khanwilkar, former Karnataka HC CJ Justice Abhay S Oka and Justice CT Ravikumar had made it clear that its order was not limited to Madhya Pradesh but applied to all states/ union territories and their election commissions.

The zilla and taluk panchayat elections were not held on schedule in May-June 2021 as the Karnataka government was in the process of redrawing local body boundaries. Meanwhile, the Supreme Court has stipulated a ‘triple test’ criterion for OBC reservation in local bodies.

As for BBMP, ever since the civic council’s term ended in September 2020, the civic agency has been governed by bureaucrats deputed by the state government, chiefly the Administrator and the Chief Commissioner. Further delaying the BBMP election was a delimitation process initiated by the Karnataka government to increase the number of Bengaluru wards from 198 to 243 as per the new BBMP Act.

Meanwhile, in December 2020, the apex court stayed the Karnataka HC’s direction for early BBMP elections on a plea by the Karnataka government. The matter is likely to come up in the SC for early hearing.

Sorry, no Holi for me: PM