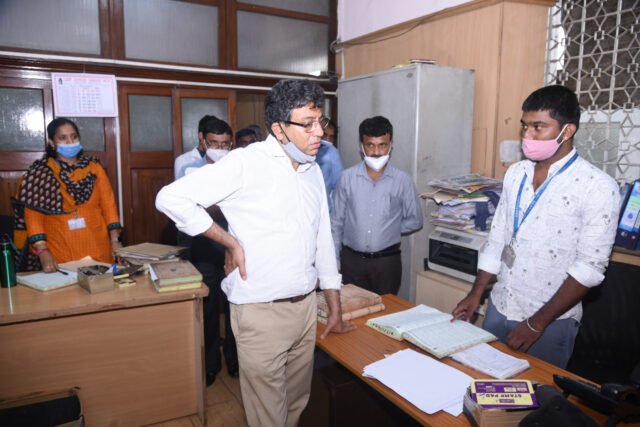 Within just eight days of assuming charge as BBMP Chief Commissioner, IAS officer Tushar Giri Nath seems to have developed a lack of trust in the existing civic staff and has handpicked his own team deputed from the Vidhana Soudha secretariat. And the fallout: his new assistants – clearly not acquainted with civic protocol – have been marking petitions and complaints received in Giri Nath’s office to the wrong department. Civic sources say this development could lead to delays in petitioners getting justice.

A top source in the BBMP corridors narrated the entire sequence of the new development to TheBengaluruLive.

On May 6, Tushar Giri Nath took over as BBMP Chief Commissioner from his predecessor, 1990 batch IAS officer Gaurav Gupta, after the latter was transferred to the Infrastructure Development Department in Vikasa Soudha.

Almost right away, Giri Nath ordered BBMP’s Deputy Commissioner (Admin) to relieve the entire staff from the personal section as he had already sourced three new team members from the secretariat. Apart from a few employees working in the inward and outward sections, the entire staff has been changed.

“We were shocked to see some written complaints related to construction violations marked to us, though we are not supposed to look into such matters,” said a staffer attached to the revenue section.

Sources said the staff in the BBMP’s Chief Commissioner’s personal section are on deputation and do not have any information on the BBMP Act 2020 or any experience of the civic agency’s functioning.

“As per the BBMP Act 2020, these construction violation-related files should have been marked to the respective zonal Special Commissioners who have been empowered to take action as per law. But the deputed staff in the Chief Commissioner’s office are not clued in to the functioning of BBMP and are forwarding these files to the wrong section. If this goes on, petitioners will be deprived of justice,” said another BBMP staffer who wished not to be quoted.

Moreover, as per another source, there are greater chances of Giri Nath being misled by lower-rank officials as he tries to take control of the administration. “As there are no BBMP officials next to the Chief Commissioner (in the personal section), there are chances that lower-rank staff may misuse and misguide Nath vis-à-vis several files related to transfers, postings, or any other related works which are tied to vested interests,” he pointed out.