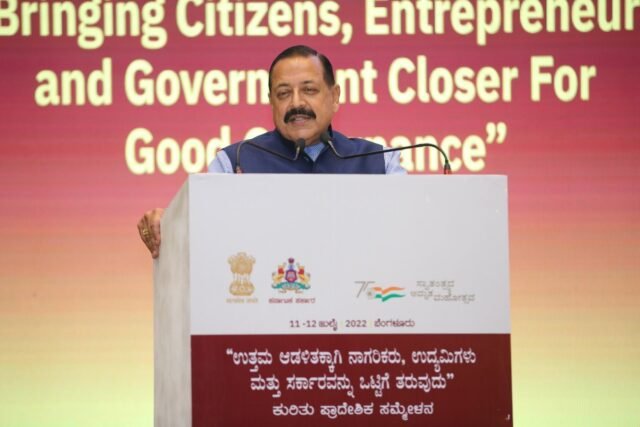 Union Minister of State for Personnel Jitendra Singh on Tuesday said the online test for recruitment to non-gazetted posts in the central government is likely to be conducted by this year-end.

He said, to begin with, the test will be conducted in 12 languages and gradually it will include all the 22 languages mentioned in the 8th Schedule of the Constitution, which will overcome the complaints of language bias coming from some southern states.

Singh was delivering the valedictory address at the two-day regional conference on governance in Bengaluru organized by the Department of Administrative Reforms and Public Grievances (DARPG) and the Karnataka government.

In his address, Singh said the hallmark of Prime Minister Narendra Modi’s governance model is his capacity to take out-of-box decisions, break the taboos of the past, and the capacity to convert the government’s campaign into a mass campaign based on his courage, conviction, and sincerity.

The minister said the governance reforms introduced by the prime minister during the last eight years are social reforms aimed at achieving “ease of living” for the common man and a ”level playing field” for the aspirational youth.

Referring to the theme of the conference — ‘Bringing citizens, entrepreneurs and government closer for good governance’ — Singh listed a series of such reforms having wider social implications, including the abolition of attestation of certificates by gazetted officers and promoting self-attestation, thus reposing faith in the youth of India. Similarly, Modi had suggested the abolition of interviews during their Independence Day address from the ramparts of Red Fort on August 15, 2015, and the same was implemented by the Department of Personnel and Training (DoPT) on January 1, 20pavingaved the way for a level playing field for all the candidates, he said.

The minister said, the number of complaints in the Centralised Public Grievance Redress and Monitoring System (CPGRAMS) increased from two lakh per year in 2014 to 25 lakh per year at present, which also reflects positively that here is a government that listens to citizens’ grievances promptly and addresses them, according to a personnel ministry statement. Singh informed the delegates that by the end of this year, the National Recruitment Agency (NRA) under DoPT is gearing up to conduct a computer-based online Common Eligibility Test (CET) for recruitment to non-gazetted posts, according to the statement.

The minister said, the prime minister’s mantra of minimum government, and maximum governance means more involvement of citizens, innovation, use of the latest techniques, and transparency.

He said the ultimate aim of all governance models is to reach out to the last man in the last queue to empower him economically. Singh said, there is a need to try to adopt best practices from each other and implement them in our respective sectors, regions, and states. He said states with similar problems have been coupled by the government so that they can share their expertise and experiences related to similar issues and learn from each others’ success stories.

Karnataka Minister of Health and Family Welfare and Medical Education K Sudhakar, in his address, said a people-centric governance model is being followed in the state.

Referring to the success of “ease of doing business”, he said because of a conducive business eco-system, 400 odd MNCs have set up units in Karnataka. Sudhakar also referred to the RRR model of ‘Recognise, Respond and Redress’ to empower the youth and the common man.

Secretary, DARPG, V Srinivas said, the conference is an effort to bring the government and citizens closer through various administrative reforms at the center, state and district levels. PTI

National Education Policy will kick off in Karnataka this year: DyCM