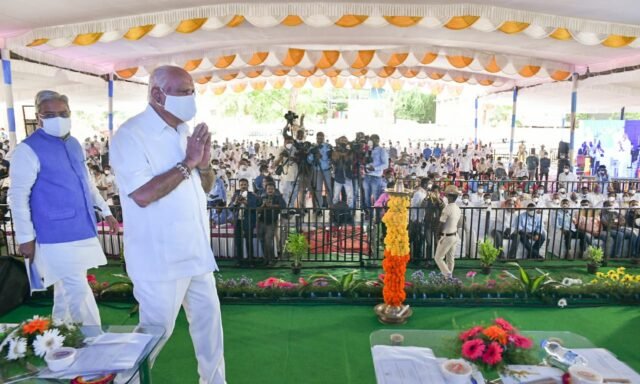 Amid reports about the possibility of a reshuffle of his cabinet, Karnataka Chief Minister B S Yediyurappa on Saturday said no such discussions have taken place so far.

‘No such discussions have taken place. There is no such thinking so far. When such a situation comes in the future, I will let you know.

There is no such thinking in Karnataka for now,’ he said in response to a question on the possibility of a cabinet rejig on the lines of the union cabinet reshuffle by dropping some senior Ministers.

During BJP national General Secretary in-charge of Karnataka Arun Singh’s individual meeting with legislators last month, amid rumblings within the party on the leadership change issue, several of them had reportedly discussed about social justice and regional imbalance in the cabinet and thereby had tried to make out a case for cabinet reshuffle.

Yediyurappa had last expanded his cabinet in January, inducting seven new ministers and had also effected a reshuffle of the departments of some ministers.

There are now 33 Ministers in the state cabinet, and one berth is vacant.

The cabinet expansion in January had resulted in large-scale resentment in the party, with too many aspirants for ministerial posts. PTI