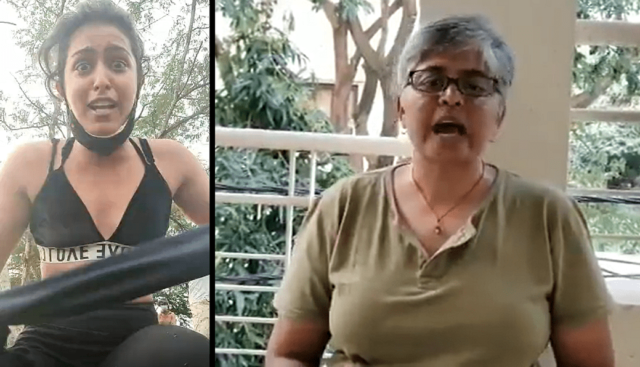 Following the September 4 incident when actress Samyukta Hegde and her friends were allegedly heckled while they were working out at the Agara lake in HSR Layout, social activist and Congress spokesperson Kavita Reddy was arrested on Tuesday and later released on bail.

The arrest followed an FIR on the basis of a complaint by Samyukta Hegde with the HSR police.

The actress was doing a hula hoop routine with 2 friends when she was heckled by walkers at the Agara lake who objected to her dress as ‘obscene’.

Kavita Reddy, Anil Reddy and others allegedly abused the actress, calling her outfit ‘inappropriate in public’. Also, one of the Samyukta’s friends was allegedly assaulted by Kavita Reddy.

It is high time that society stops harassing women for what we wear, where we go and what we do.
I have filed an FIR and I have full faith that a fair investigation will be carried out.
I hope for a better future and a safe space for us to just be us#ThisIsWrong pic.twitter.com/SY6a2ZgAKd

The accused allegedly said they would put out ‘news’ that the actress consumed drugs and came to the park.

The scene was videographed by Samyukta and uploaded on her social media site. The video has been used as evidence and the police are on the lookout for Anil Reddy and others who are absconding.

On Sunday, Kavita Reddy had sent out an apology to the actress. She had said, “I have always opposed moral policing. I realize that my actions were construed as such. An argument ended up in me reacting aggressively as well. It was a mistake.”

She added, “As a responsible citizen and progressive woman, I own up and sincerely apologise to Samyukta Hegde and her friends.”

I have always opposed Moral Policing. I realize that my actions were construed as such. An argument ended up in me reacting aggressively as well, it was a mistake. As a responsible citizen n progressive woman, I own up to n sincerely apologise to @SamyukthaHegde n her Friends! pic.twitter.com/pM9UJkWESC

On Tuesday, the actress said she was not interested in pursuing a case against Kavita Reddy as she ‘respects her seniority’ and doesn’t want to traumatise her. But she said she would continue with her complaint against Anil Reddy and others who had threatened her.