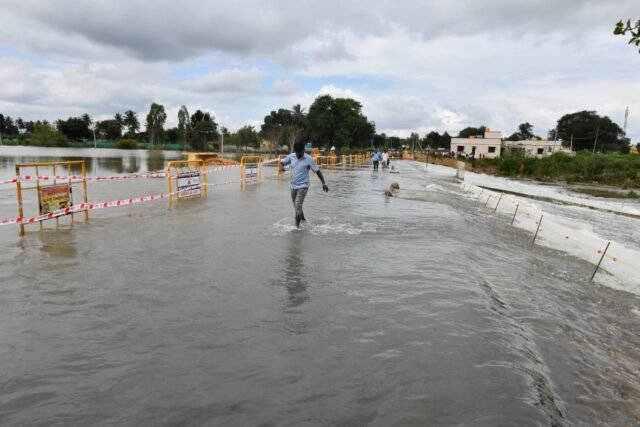 As many as 24 people have lost their lives in the unseasonal heavy rains in most parts of Karnataka, while crops in nearly four lakh hectares have been damaged across the state, according to the Chief Minister’s Office. The figures for the period November 1 to 21 further show that as many as 658 houses have been completely damaged, 8,495 homes are partially damaged and at least 191 livestock have perished.

The data put out by Manoj Rajan, KSNDMC Commissioner, shows that 2,203 km of roads have been damaged, while till Sunday evening the other infrastructure damage reported includes 1,225 schools, 39 PHCs, 1,674 electric poles and 278 electric transformers.

Speaking to the media on Monday morning, Chief Minister Basavaraj Bommai said Rs 500 crore will be released for repairs to roads and bridges while steps have been taken to disburse compensation at the earliest to those whose houses have been damaged.

Also Read: Rs 500 crore for repair of roads and bridges damaged due to rains: Karnataka CM

In terms of lives lost, as per the data Davanagere and Chitradurga have reported 3 deaths each, followed by 2 deaths each in Belagavi, Chikkaballapur, Dakshina Kannada, Chikkamagalur, Kodagu, Kolar and Bengaluru Rural, and one casualty each in Mandya, Ramanagara, Tumakuru and Udupi.

Karnataka ITIs to get 6 cutting-edge courses