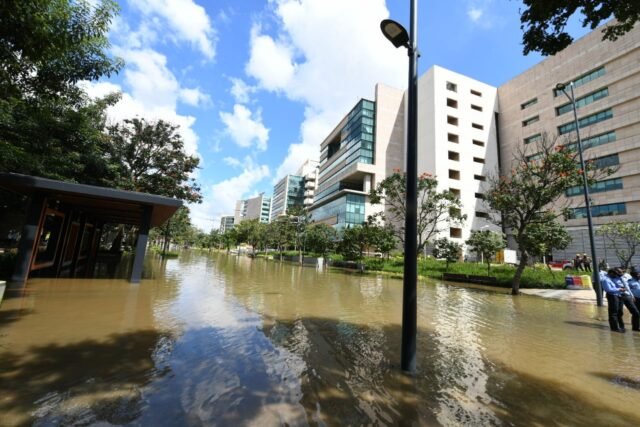 A Master plan to widen the major Rajakaluves (Storm Water Drains) and build diversion canals in Bengaluru to ensure smooth flow of waters would be drawn up to address the problem of flooding, Chief Minister Basavaraj Bommai said here on Tuesday.

Chief Minister Bommai who visited Manyata Tech Park, Jawaharlal Nehru Centre for Advanced Scientific Research, and surrounding areas that are flooded due to the incessant rains in the last few days said, JNCASR has been badly hit as the flood waters had entered the labs, damaged the equipment and vital research samples. It is a prominent institution engaged in research to better our future.

“It is our duty to protect this institution. Necessary action will be taken to prevent water from entering the institution, its labs, and library in future. A master plan would be drawn up to prevent flooding. Top heads of the institute would also be involved in formulating the master plan,” Bommai said.

Action to widen the Rajakaluves

Attributing the flooding to unusually heavy rains Bommai said, “about 138mm of rains lashed the city in just 2 hours recently. All the lakes in and around Yelahanka are overflowing. The situation is the same in many parts of the city. The existing Rajakaluves with a width of 8 to 10 feet is proving to be inadequate to carry the heavy flow. The flood waters flow through Yelahanka lake and down to Jakkur lake, Rachenahalli lake, and then towards KR Puram to join Pinakini river before entering Tamil Nadu. Measures would be taken to widen the Rajakaluves and build diversion canals. Action to divert the waters from inundated apartment complexes and institutions would also be initiated,” he stated.

Encroachments on Rajakaluves would be cleared

Replying to questions from media persons on evicting encroachments on Rajakaluves, Bommai said, BBMP had identified 714 illegal structures on Rajakaluves. Houses and buildings which have come up on Rajakaluves would be evicted. However, he assured that care would be taken to ensure that the poor are not affected by providing them alternative facilities. Houses and residential complexes on the Buffer Zones would be shifted after giving them adequate time to move.

Flood havoc in the city has drawn the attention of Prime Minister Modi as he called the Chief Minister on Tuesday morning and sought details. “The Prime Minister enquired about the loss of lives, damage to crops, and public property. He was particularly more concerned about Bengaluru. The Prime Minister asked me to draw up short-term and long term measures to tackle the problem,” Bommai said.

Inspecting the water logging at Manyata Tech Park Bommai observed that the problem is being caused by flaws in the internal drain system in the tech park. He instructed the BBMP officers and the personnel of the tech park to work in coordination to address the problem. “Action should be taken at the earliest to ensure that those working in the tech park are not affected,” he said.

A planned drainage system is needed to avoid flooding in the city. The Water from overflowing lakes is flooding the low-lying areas. A master plan to ensure smooth flow of flood waters from Yelahanka through Mahadevapura to Pinakini river would be drawn up, he said.

In U-turn, Karnataka imposes night curfew in Bengaluru, 6 other cities