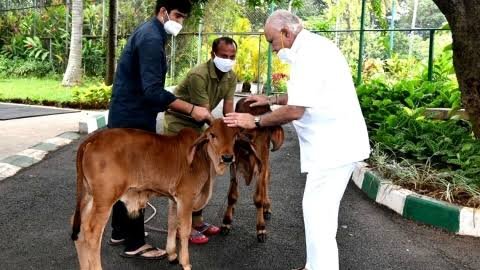 Karnataka on Tuesday promulgated the anti-cow slaughter ordinance that provides punishment for killing of cattle and offers protection to those “acting in good faith” to save them, as the bill to this effect is yet to be cleared by the Legislative Council.

The state cabinet had last week decided to promulgate the Karnataka Prevention of Slaughter and Preservation of Cattle Ordinance- 2020, which has now received the Governor’s assent.

According to it, cattle is defined as a cow, calf of a cow, bull and bullock of all ages and he or she buffalo below the age of thirteen years, while beef has been defined as the flesh of the cattle in any form.

The government has already said that, once it comes into effect, there will be a blanket prohibition of slaughter of cows in the state, however, slaughter houses will continue to function and beef consumption will not be prohibited with respect to buffalo meat, as buffaloes above the age of 13 can be slaughtered.

Exemption has been given to slaughtering of terminally ill cattle or cattle suffering from contagious diseases or operated upon for experimental or research purposes.

Also, buffaloes above the age of 13 years can be slaughtered with certification from a competent authority, it said.

Offering protection for “persons acting in good faith” under the ordinance and its rules, it said, no suit, prosecution or other legal proceedings can be instituted against the competent authority or any person exercising powers under this ordinance.

The government had to opt for the ordinance route, as the Karnataka Prevention of Slaughter and Preservation of Cattle Bill that was passed by the Assembly last month during the winter session amidst din with stiff opposition from the Congress, has not been approved by the Legislative Council yet.

The Council was adjourned sine die even before the bill was tabled there for passage.

For a bill to become law, its passage in the Council, followed by assent by the Governor is necessary.

According to sources, BJP that had hurriedly tabled the bill and ensured its passage in the Assembly during the winter session did not table it in the Council sensing that the numbers were not in its favour with combined opposition- Congress and JD(S)- against it, and may refer it to the joint select committee.

Animal Husbandry Minister Prabhu Chauhan along with officials, had even travelled to Uttar Pradesh and Gujarat to study and gather information regarding implementation of the laws there, before bringing the 2020 bill to the Assembly in December. PTI