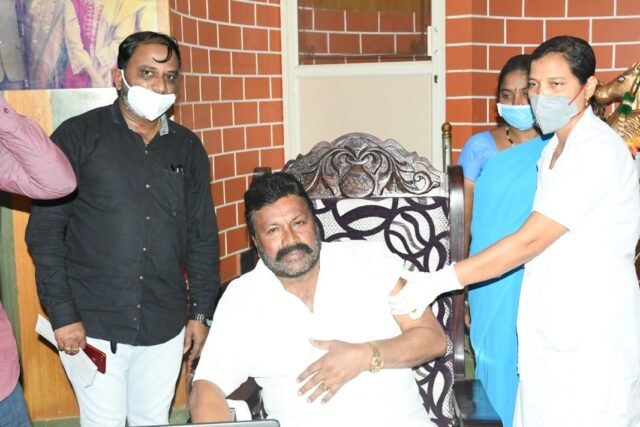 Karnataka Agriculture Minister B C Patil on Tuesday courted controversy after taking COVID-19 vaccine at his home instead of going to designated hospital, drawing criticism from Health Minister K Sudhakar and others.

Patil, 64, and his wife took the vaccine at his Hirekerur residence in Haveri district, on the second day of the vaccination drive to cover people aged above 60 and 45 plus with co-morbidities. Patil tweeted, “Took the #COVID19Vaccine with my wife, at my Hirekerur house from the Govt. doctors today. While ”Made In India” vaccines are being immensely appreciated by many countries, some vested interest groups are spreading false information about the vaccines.

I appeal to all the eligible people to follow the protocol and take the vaccine to help the cause of building pandemic free, healthy India.

As several social media users questioned his decision to take the vaccine at home, Sudhakar said the protocol is to get it in the hospital.

When reporters sought Chief Minister B S Yediyurappas reaction, he said getting vaccinated was more important than the place where the inoculation happened.

Patil defended himself, saying he has not committed any crime and wanted to avoid trouble for the public. “Have I done any theft or robbery? I have only taken the vaccine at home, which is not a crime,” the Minister told reporters.

He said it was good that his inoculation became public which would inspire others to take the shot. Patil added that had he gone to the hospital, it would have caused trouble to people waiting there. However, Sudhakar expressed his dissatisfaction over the conduct of Patil and said the medical team should have persuaded him to come to the hospital. “Unless there is a prior permission, no one is allowed to go home to vaccinate. It is wrong to go home to administer a vaccine,” he said.

He would issue a circular to the doctors not to administer vaccines at home, the minister added. Prime Minister Narendra Modi and several others had taken the vaccine shots in designated hospitals on Monday. PTI

BBMP drops insistence on ‘mask’, indicates ‘any cloth’ will do