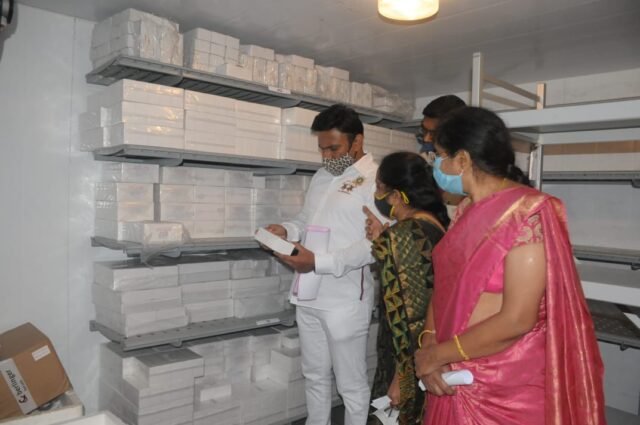 Karnataka Health Minister K Sudhakar on Sunday said he would be the first person in the state to be administered the vaccine during phase-I planned for health workers, if the central government allowed public representatives also to be covered.

“The first batch to take the Covaxin will be the healthcare workers, but if the Government of India allows us to take, I will be the first to get it as a health Minister,” Sudhakar told reporters during the inspection of the state vaccine store here.

Stressing that volunteering for the vaccine was necessary to instill confidence among the people, he said, “See, we have to imbibe, infuse confidence in the public. So, why not (I take it)?” On the vaccine storage facility, Sudhakar said the state has two major vaccine storage houses — one in Bengaluru and another one in Belagavi. They have storage capacity of 45 lakh doses of vaccines. Besides, there are five regional and district level storage facilities, the minister said adding the state has also roped in 900 logistic vehicles to transport vaccines to various parts of the state. The Minister noted that the state would get about 13.9 lakh doses of vaccine in the first phase.

To a question on the challenges faced during the dry runs, Sudhakar said he noticed at certain places digital and technical lacunae, where the OTPs did not reach to the right person from the nodal officer. Now, it has been rectified, he added. The Minister further said the Prime Minister will be holding a meeting with all the Chief Ministers on Monday to review the preparedness for vaccination drive.

According to Sudhakar, the priority will be frontline health workers. The focus will then shift towards vulnerable groups such as people above 50 years of age with co-morbidities and youngsters. Regarding those who returned to the state from the United Kingdom recently, the minister said a system for effective management of data of passengers arriving at airports has been put in place.

He added that on Sunday 289 passengers arrived here from the UK and four among them have been found positive for coronavirus. “Infected persons will be traced and admitted to hospital,” he added. PTI

CM to chair meeting at 11 am today to discuss lockdown 4.0